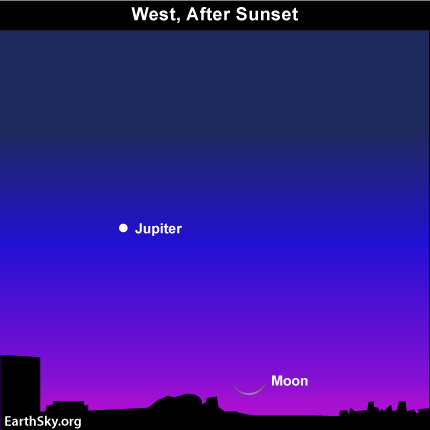 [3]For us in North America, March 5 presents a golden opportunity to catch a very young moon. As seen from North America, tonight’s waxing crescent moon [4] is less than 30 hours old. In other words, the moon will make its first appearance in the March evening sky less than 30 hours after the moon turns new [5]. You will need a level horizon and crystal-clear skies to see the very thin lunar crescent in the west after sunset.

This little moon will be just over 1% illuminated in sunshine – a fragile and beautiful sight reminiscent of all new beginnings.

What is the youngest moon you can see? [6]

With the whisker-thin lunar crescent setting roughly one hour after sunset in North America, residents in North America (and some North Pacific islands, such as Hawaii) might spot the young moon at evening dusk tonight. Elsewhere around the world, the moon will probably set too soon after sunset to be visible this Saturday evening – except, possibly, in northwestern Europe.

Plus! There is a bonus in tonight’s western sky shortly after sunset. As our sky chart shows, the young moon will be near the blazing planet Jupiter tonight, for about 45 minutes after sunset on March 5, as seen from North American mid-northern latitudes.

As a consolation prize, nearly everyone worldwide can catch Jupiter after sunset. This brilliant planet appears low in the west now, especially as seen from the southern hemisphere. For optimal viewing, find an unobstructed horizon in the direction of sunset. At mid-northern latitudes, Jupiter sets about 2 hours after the sun; but at middle latitudes in the southern hemisphere, Jupiter sets about one hour after sunset.

Remember, Jupiter is bright. If you have a clear horizon to the west shortly after sunset, you should be able to spot it.

This is the end of Jupiter’s wonderful 2010/2011 apparition [8] in our skies, which saw it closer to Earth than it had been in many decades. Did you see it around October 2010? It was very bright and in the sky all night. Now Jupiter is about to slip into the sunset glare. That is because our faster-moving Earth has sped ahead of Jupiter, and we are about to “turn the corner” ahead of the giant planet in orbit, placing the sun between us and it. However, don’t worry. Jupiter won’t be gone for long. Earth will speed on in its orbit around the sun, bringing Jupiter back into view before dawn later this year.

How do I translate Universal Time into my time? [9]

If you have binoculars, have them handy as you seek for the young moon beneath Jupiter and near the sunset point on the horizon on March 5, starting around 40 minutes after sunset.