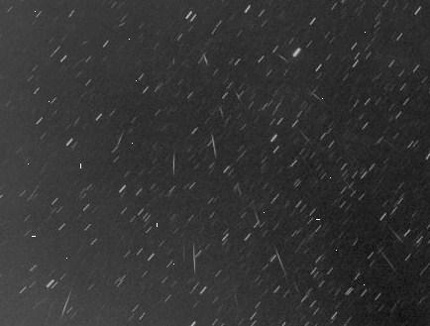 The annual Eta Aquarid meteor shower is expected to produce the most meteors before dawn tomorrow (Friday, May 6). But – because these meteors have a relatively broad maximum – you can look for some Eta Aquarids before dawn on Saturday, too.

Planets visible at dawn: Venus [4] and possibly Mercury [5] and Jupiter [6]

The Eta Aquarid meteors are strictly for night owls or early risers. This shower does not start until around 2 or 3 a.m. The meteors are few and far between at that hour, but the wee hours are a time for catching earth-grazing meteors. An earth-grazer is a long, slow, colorful meteor that horizontally streaks the sky.

The closer to dawn, the more Eta Aquarid meteors you are likely to see. These meteors are extremely fast and often bright, striking Earth’s atmosphere at 66 kilometers – about 41 miles – per second. Many of the brighter meteors leave persistent trains – glowing ionized gas trails – for a few moments after their fiery plunge.

To recap, the Eta Aquarid meteors will probably be at their best during the predawn hours Friday. If you plan to watch them, you will want a dark, wide-open sky – a reclining lawn chair – and for your feet to point in a general eastward direction. That is where the radiant point for this shower – in the constellation Aquarius the Water Bearer – will rise. At mid-northern latitudes, expect 10 to 20 meteors per hour. South of the equator, you might see twice that many!

Why does the Eta Aquarid meteor shower favor the southern hemisphere? [7]

Find the radiant of the Eta Aquarid meteor shower [8]