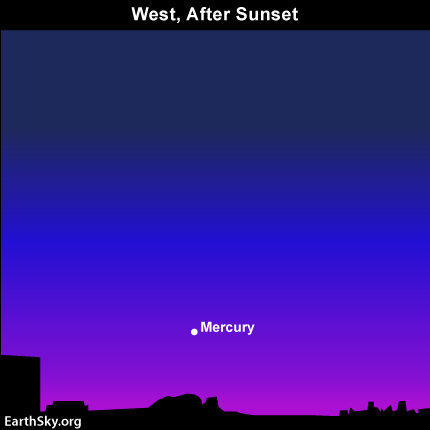 [3]Mercury, the solar system’s innermost planet, never strays far from the sun and into Earth’s nighttime sky. Today, however, this world reaches its greatest elongation east of the sun at 7 p.m. Mountain Daylight Time. Mercury swings to the end of its tether, at 19 degrees east of the sun. (For reference, your fist at an arm’s length approximates 10 degrees of sky.)

Nineteen degrees east of the sun is not very far, but it is far enough to showcase Mercury as an evening “star” at dusk. For the northern hemisphere, this month stages Mercury’s best apparition in the evening sky for all of 2011. At mid-northern latitudes, Mercury sets about one and one-half hours after the sun right now.

In the northern hemisphere, Mercury should remain in good view until the end of the month. Look for Mercury to shine low in the west some 45 to 75 minutes after sunset.