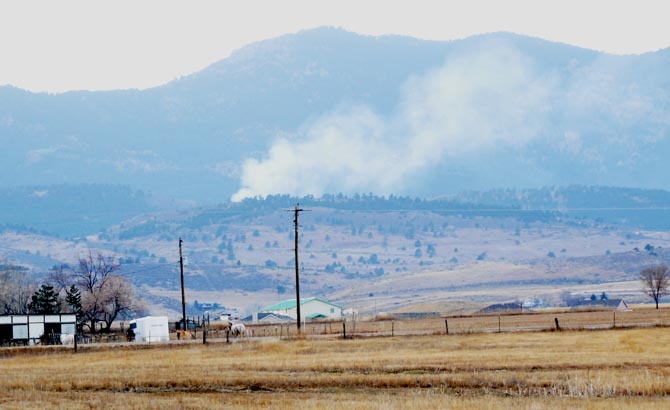 [1]
Smoke rises from a grass fire near Carter Lake, site of the crash of a single engine aircraft.

The Denver Post identifies the downed aircraft as a C [2]essna 210 [2] Centurion [2] registered to a Lyons, Colorado resident. No names have been released.

At approximately 2:45 PM on December 27, 2010, Larimer County Sheriff’s Office Dispatch Center received a report of a downed aircraft west of Carter Lake in Loveland which ignited a small fire.  Emergency personnel responded to the area and found a single engine aircraft.  One fatality has been confirmed by personnel at the scene.

Larimer County Emergency Services units report that the two-acre fire started by the downed aircraft is under control and  in the mop-up stages.  Units will remain on scene tonight.

The NTSB will be on scene tomorrow.  The Larimer County Coroner’s Office will issue the identification and manner and cause of death of the fatality.

No further information will be released tonight.