Larimer County Sheriff’s Office deputies arrested Shane Wagner, DOB: 03/26/1985 of Bellfourche, South Dakota and Jeremy Christopherson, DOB:  01/23/1987, of Spearfish, South Dakota for possession of 28.75 ounces of marijuana. The two men were arrested after deputies stopped them for speeding more than 110 miles per hour on I-25 north of Fort Collins at approximately 1:22 this morning. A nine-millimeter Springfield handgun stolen out of Spearfish, South Dakota was also recovered during the stop.

Shane Wagner, formerly of Loveland, was arrested for felony Possession of Marijuana (F6), Theft by Receiving (M1), Driving while Cancelled/Denied (M0) and Speeding (T2). Mr. Wagner also had a warrant out of Fort Collins Police Services for failure to appear in court for a driving under restraint hearing. He is currently being held at the Larimer County Jail with a $3600 bond.

Jeremy Christopherson was arrested for felony Possession of Marijuana (F6) and Theft by Receiving (M1). He is also being held at the Larimer County Jail with a bond of $3500. 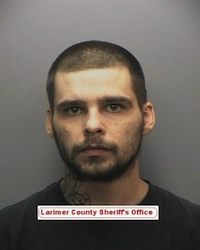