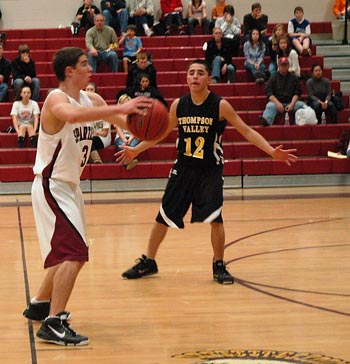 The Berthoud Spartan boys basketball team won their second consecutive game on Saturday night in their final contest of the Spartan Basketball Invite. Berthoud edged out Thompson Valley 52-48, improving their record on the season to 2-4.

Thompson Valley features the tallest players Berthoud has faced thus far in the season, including freshmen center Austin Dyer who measures 6’5” tall. To counter the height of the Eagles, Berthoud Head Coach Pete Scheck made a change to his normal starting lineup by replacing 5’10” junior Jesse Queen with the stout, 6’2” Luke Reed. Reed, a junior, was joined by 6’3” senior Cameron Botts and 6’ junior Greg Hutchins in the Berthoud frontcourt. “I just wanted to have our big guys out there to match up with their big guys,” Scheck said after the game.

The lineup change paid off early for the Spartans as they began the game with an 8-0 scoring run and had an 11-6 lead at the end of the first period. After Botts got into some early foul trouble, tallying his third personal of the game at the 4:05 mark in the second period, Berthoud was forced to go to a slightly smaller lineup. This afforded Thompson Valley an opportunity to close the Spartan lead to one at halftime.

Berthoud enjoyed its fair share of success from beyond the arc in the second half, going 9/16 from three-point range. Hutchins had found his groove scoring 13 of his team-leading 21 points on the night in the second half and nailing consecutive three pointers. Rubesam and Queen added three-pointers of their own in the Spartans’ 17 point third period. The fourth period got off to a rocky start for the Spartans as they committed turnovers on four consecutive possessions. But once again their clutch shooting would be their savior, both from beyond the arc as well as from the free-throw line. In the fourth period alone the Spartans attempted 14 free-throws. Junior guard Mic Nienaber was particularly impressive from the line, converting 4/6 foul shots. “You always have a routine when you go to the line, you’ve got to make sure you’ve got that routine down and nothing can mess it up. You’ve just got to be you up there,” Nieaber said of his clutch late fourth period free throws. 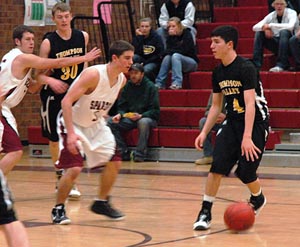 [2]
Spartans on defense in the 3rd period

Berthoud’s defense was particularly impressive on the night. As a team the Spartans snatched 13 steals on the way to forcing 20 Thompson Valley turnovers. They held the Eagles to a 34 percent (19/56) field goal shooting “I thought we played better defensively tonight, start to finish,” said Coach Scheck. Nienaber notched his team-high fifth steal of the game with 0:10 remaining and with the Spartans clinging to a two-point lead. After taking the ball away from Thompson Valley, Nienaber was off towards the Berthoud basket only to have an Eagle player foul him as he went in for the game-clinching lay-up. Nienaber explained that he was just going for a quick foul to force the Eagles to have to inbound the ball and use up more time but “I just got the steal,” he explained. He sank both free throw attempts and clinched the 52-48 Spartan victory.

Berthoud High boys basketball has a three-week break over the holidays before playing their next game. On January 4 the Spartans will travel to nearby Johnstown for a meeting with Roosevelt High School.