It was a tale of two halves for the Berthoud High boys basketball team on Thursday night as the Spartans fell 80-64 to Thompson Valley in the opening game of the Berthoud Tournament.

Berthoud jumped out to a 23-15 lead in the first period only to then get out-scored 65-41 in the next three periods.

“We shot free throws well and we got off to a good start but we’ve just got to be able to play consistent from start to finish,” was how Berthoud Head Coach Pete Scheck described his team’s uneven performance.

The Spartans began the game strongly by capitalizing on a litany of Thompson Valley fouls. Berthoud went on a 15-2 run in the first period, sinking seven of eight attempts from the free throw line. The Eagles penchant for committing fouls hindered them early as they found themselves in the penalty before the end of the opening period.

Senior forward Greg Hutchins led the way for the Spartans early by sinking three foul shots and a pair of three pointers on the way to 11 first period points. Yet Berthoud allowed Thompson Valley to battle back in the waning minutes of the first period as senior Eagles guard Trent Baisley scored seven points in the period’s final ninety seconds.

Still, Berthoud remained in the control of the game with a 23-15 lead at the end of the opening eight minutes of play. 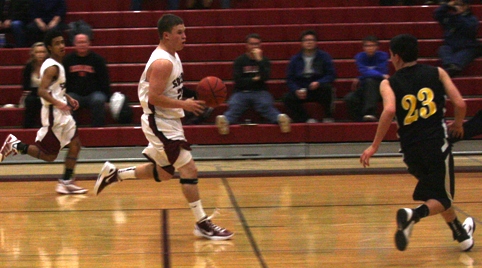 [1]
Zach Ruebesam on a fast break in the second period

The second period saw Berthoud continue to excel with their free throws as the team made good on six of their eight attempts from the stripe. Yet a stiffening Thompson Valley defense and a number of costly turnovers hindered the Spartan’s efforts to maintain their lead; Berthoud sank only three shots from the floor in the period.

The Eagles made use of their size advantage as a pair of front court sophomores – Collin Smith and Austin Dyer – combined for 14 points in the second period. Less-than-stellar field goal shooting did not hold the Eagles back as they were continually able to get second chances for points by out-rebounding Berthoud by more than two-to-one, 23-10, on their end of the floor.

Despite coming out of halftime with the game tied at 37, a 12-4 Thompson Valley scoring run that opened the second half forced the Spartans away from their game plan.

“They want to correct situations so they take on a little more than they should and then things start snow-balling as we start doing things we shouldn’t do….we start turning the ball over and taking shots that maybe aren’t as good as they should be and now that six-point lead turns in a 12- or 14-point lead,” Coach Scheck said after the game.

The 12-4 scoring run with which Thompson Valley began the period was only the beginning as the Eagles finished the period out-scoring the Spartans by three-to-one, 21-7. That was enough to begin putting nails in the Spartans’ coffin. Even Berthoud’s 20-point fourth period was not enough to ever get the Spartans within serious striking distance.

The loss drops Berthoud to 1-3 on the young 2011-12 season. The Spartans will play two more games as part of the Berthoud Tournament; Friday at 8pm against Roosevelt and Saturday at 2:30 pm against Northridge.