The Berthoud High football team was able to overcome a couple of big mistakes and a few unlucky breaks to eke out their second consecutive victory of the 2011 season Friday night at Max Marr Field. It took an overtime period – where Berthoud’s defense shined – to top Sterling 27-21.

“When the chips were down, we made some plays. We didn’t play well for about five or six minutes there, again, when we had a two-touchdown lead … I feel very fortunate and you’ve got to celebrate wins in northern Colorado in this 3A,” said Berthoud Head Coach Dan McGinn after the game.

With 3:15 remaining in the third quarter, Spartan freshman running back Michael Woodiel, in the game for All-Conference senior Chase Fraser who was out with apparent leg cramps, carried the ball four straight times for 50 yards including a 25-yard touchdown run to give Berthoud a 19-6 lead.

“(Woodiel) made us real proud … he’s a tough, tough kid, he runs real well … I’m real excited for him,” McGinn said of his freshman tailback. McGinn added that Friday was Woodiel’s first varsity game and early on the young man was understandably wide-eyed but settled in very nicely and played a huge part in Berthoud’s eventual victory.

Berthoud then converted the two-point conversion on a pass from quarterback Zach Ruebesam to Cory Ellis to take a comfortable 21-6 lead.

On the ensuing kickoff, Tiger return man Cody Lechman scampered 89 yards down to the Berthoud five yard line. On the next play, the Tigers called a wide receiver screen and scored to get back in the game. 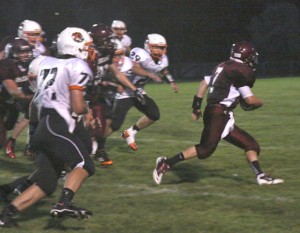 Late in fourth quarter the Spartans attempted to the put the dagger Tigers’ heart with a fake punt. Unfortunately for Berthoud the fake failed on an incomplete pass and Sterling took possession at the Berthoud 47. Sterling quickly moved down field and punched the ball with a one-yard run from Luke Engelhaupt, converted their two-point conversion and tied the game at 21 with barely one-minute remaining.

“You can’t second-guess yourself, it is what it is,” McGinn said of the failed fake punt attempt. Often times risky plays pay off and the decision appears to be a stroke of genius. When they fail, as this one did Friday night, coaches can get maligned. McGinn was forceful in his that he felt him and his staff made the right decision at the time as they believed they saw a window to make convert the fake and put Sterling in a precarious position.

After connecting on two passes, one to Ellis and one to Fraser, Berthoud appeared to be moving into field goal range kicker Axel Ayala. Yet Sterling’s defense stiffed and forced three consecutive incomplete passes, hitting Ruebesam on third and ten and forcing a Berthoud punt.

In overtime Sterling was given the ball on the ten yard line with four chances to score. The Berthoud defense, as they had all night, made big plays when they needed them most. On third down, senior linebacker and team captain Brok Diffendaffer tackled Sterling’s Chris Sturgeon for a one yard loss. On the next play, Spartan sophomore Nathaniel Ryken tipped the pass, forcing an incompletion and giving the ball back to his offense with the score still tied.

McGinn went to Fraser on Berthoud’s first offensive play in overtime. Fraser carried the ball to left side and appeared to get into the end zone and win the game. Yet the official ruled Fraser out of bounds at the half yard line. McGinn went back to Fraser on the next play to clinch the victory. The game-winner was Fraser’s second score of the night as he carried the rock 21 times for 106 yards.

Ruebesam had a big night on both sides of the ball. The senior completed thirteen passes, one for a third quarter touchdown to Greg Hutchins, for a total of 184 yards. On defense, he was able to deflect a pass on second down in the overtime period. Ruebesam said Friday night’s game was the first time he had played defense since his freshmen year and that all he wanted to do on that side of the ball was make a big play. Mission accomplished.

“Wow,” Ruebesam said following the game, “We hung tough all night and that’s what I love about this team – our will to win.”

The Spartans will attempt to keep their undefeated season alive on Friday night when Frederick will pay a visit to Max Marr Field.