If there exists such a thing as an ugly win in the world of sports, the Berthoud High football team experienced it first-hand on a warm Friday evening at Bob Felps Field in Fort Lupton.

Despite topping Fort Lupton by a score of 27-14, the Berthoud team was, to put it mildly, disappointed with a performance in which they were flagged a whopping 15 times. Incessant Spartan penalties kept a clearly-inferior Fort Lupton team in the game for far longer than they should have been.

It took a 30-yard touchdown run from All-Conference tailback Chase Fraser with only 2:02 remaining in regulation for the Spartans to deal the final death blow to the Blue Devils.

“We have a lot to work on, that’s all I have to say,” was all that usually-loquacious Berthoud High head football coach Dan McGinn said after the game.

“We didn’t play Berthoud football and we took it out on them,” was the explanation given by standout wide receiver and linebacker Cory Ellis for Berthoud’s litany of personal foul penalties.

Berthoud did most of their damage in the second quarter, scoring three touchdowns and forcing two Blue Devil turnovers in the final eight minutes of the first half.

Ellis scored the Spartans’ first touchdown of the night when the he split the Blue Devil defense on a 33-yard pass from quarterback Zach Ruebesam to give Berthoud a 7-6 lead with 8:05 remaining in the second quarter. 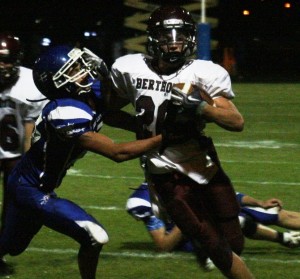 After the Ellis touchdown, Ruebesam found Fraser twice for scoring plays. The first was a 40 yard catch-and-run at the 3:30 mark that gave Berthoud a 14-6 lead. The second was a perfect pass down the right side that hit Fraser in stride and put Berthoud in the lead 20-6.

The Spartans did allow a few big plays but came up with turnovers when they were most needed. Berthoud forced and recovered a fumble as the Blue Devils were deep in Berthoud territory and threatening to score.

After surrendering a 70-yard kickoff return that allowed Fort Lupton to begin inside the Berthoud 20 yard line, junior defensive back Alexander Kingsley snagged an interception just in front of the goal line with only 1:03 remaining in the first half.

Both of the turnovers that the stout Spartan defense forced in the second quarter took away Fort Lupton scoring opportunities and afforded Berthoud a 20-6 lead at half time.

Fort Lupton made the game interesting in the fourth quarter as they narrowed the Berthoud lead to 20-14 after scoring from the Spartan one yard line on fourth-and-goal. Berthoud’s defense stuffed Fort Lupton on consecutive plays from inside the two but on fourth down quarterback Zach Boyd snuck across the goal line for six points. It was, however, the last score the Spartan defense allowed on the night.

Both teams were guilty of multiple penalties throughout the game. When all was said and done, a total 25 penalties (15 on Berthoud, 10 on Fort Lupton) were accepted for a total of 205 yards. Berthoud’s coaches were understandably irate with the number of mental mistakes their team made.

Despite turning in his usually strong performance on both sides of the ball, Ellis, a senior and team captain, was contrite in his post-game remarks saying, “This win is a loss to us; we took steps back this week and every week we need to step forward … we need to move onto homecoming next week and come out harder.”

Still, a win is a win and Friday’s victory over Fort Lupton improves Berthoud’s record to 3-1 on the season.

The Spartans will try to cut down on their mental mistakes and notch another victory next Friday night when the Fort Morgan Mustangs visit for the annual homecoming game.