Following the suicide of a Turner Middle School eighth-grader in March there has been a great deal of talk about bullying in the Berthoud Schools. Tuesday saw two separate events about bullying.

Many definitions of bullying were expressed at these meetings, but the basic tenets were the same. Bullying is repetitive, persistent abusive behavior with the purpose of causing physical or mental harm. It revolves around an imbalance of power and may involve verbal harassment or physical assault or coercion. Read More [1] 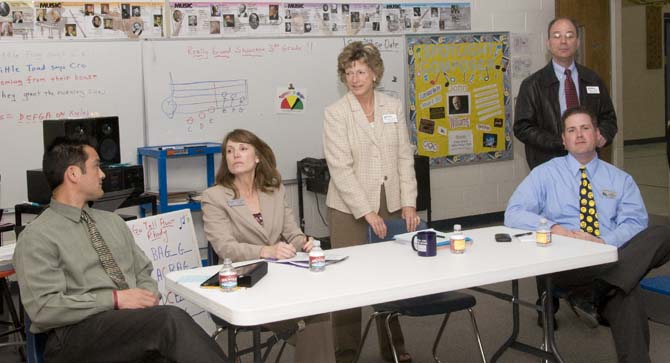 The first meeting was a Thompson School District press conference held at Ivy Stockwell Elementary School, the second a meeting of parents whose children, mostly middle-schoolers, have been victims of bullying by other students. The contrast was stark.

In the morning press conference, attended only by members of the media, the principals of each of Berthoud’s schools described the anti-bullying efforts at their respective schools.

Rhonda Richer, principal of the host school described the process at her elementary, explaining that anti-bullying efforts had predated her tenure, going back 14 or 15 years. Anti-bullying, building friendships and resisting peer pressure were keystones of the program. She, as did all the principals, explained that the program taught, “what is bullying” as distinguished from social conflict.  Children are taught what to do when bullied and they work with the victim. This year the school has adopted the “Bully Blockers [3]” program. She also pointed out that there needs to be a system of consequences for the bully.

Camilla LoJeske, principal at Berthoud Elementary, is using Positive Behavioral Interventions and Supports [4] (PBIS) and teaches how to resolve and how to report bullying. Incidents are situational she said, noting that handling a kindergarten incidence might be quite different than dealing with a 4th or 5th grader. She also pointed out that much of what schools do is confidential and invisible to the public.

Bill Siebers, principal at Turner Middle School, spoke at some length about the anti-bullying programs in place at his school. “We are trying to create a caring culture,” he said. That includes the Bully Proofing [5] program, group work, acting out scenarios and guest speakers. He outlined the “R” for respect program in place for the last two years and said that the school has night sessions for parents. Programs have included presentations by J.P. Butler of Do Something [6] who will be returning on May 12, including a program for parents. Seibers said that public forums with parents are important and that the school tries to communicate with parents as soon as possible when a bullying incident is identified.

Both Seibers, and Chris Garcia, Berthoud High School principal, talked about the increase in cyber bullying. With the advent of social networking, the cyber bullying can take place anywhere and at anytime and is brought into the school. “Kids will say things on the Internet that they would never say face-to-face,” Seibers said. Seibers plans to initiate the “No Place for Hate [7]” program offered by the Anti-Defamation League. He also has established a “Report Bullying Behavior” link on the school website with an email that goes directly to the principal. A check of the link however showed that it also sends to the email address you2@youremail.com [8], a nonexistent address at a domain that is listed as being for sale. An email sent to that address was returned as undeliverable. Not surprisingly, Mr. Seibers says he has not received any reports from that link.

Chris Garcia from Berthoud High School related that they have been using PBIS and No Place for Hate, having completed the first year of that program. They also recommend the “safe 2 tell [9]” site as a place to anonymously report threatening behavior. Garcia also said that, when possible, the school uses the technique of “restorative justice [10]” as a means to change attitude, not just suppress bullying behavior. The high school has also invited J.P. Butler to make a presentation and Garcia stressed the importance of staff training. He noted that there has been a change since he was in school. Where he and his friends would stand together to stop bullying, most kids today will not get involved. He also pointed out that bullying behavior in the upper grades takes place when no adult is present or when an adult does not intervene.

This relatively upbeat presentation of the Berthoud School’s anti-bullying efforts was contrasted by the evening meeting of concerned parents, including the parents of the suicide victim. This group felt that their children’s needs had been ignored, that they as parents had not been informed and that in general the schools have not been supportive or helpful with the victims of bullying. One suicide and four middle school students requiring hospitalization for self-inflected injuries in the last two months would indicate that they have cause for concern.

The meeting included two guest speakers. Lisa Scott pioneered the Power Up [13] program for the Girl Scouts. The motto “Doing nothing? Not an Option,” describes the concept behind it. Power Up is designed to teach the bystanders to bullying to intervene when they see something wrong. She said that studies show that peers intervene more than adults do.

After Scott’s presentation, several parents described their children’s problems with bullying. Only one bright spot emerged when a parent describe her son being bullied at the high school. As in many cases, by the time the parent finds out, the bullying has reached a stage where the child does not want to go to school and grades have suffered. She said that she called principal Garcia and his reaction was quick and decisive and her son has had no further problems.

Unfortunately, none of the other parents present had success stories.

Also speaking in the evening was a representative of the  Suicide Resource Center of Larimer County. She described the signs to look for and advised what actions might assist someone contemplating taking their own life. Suicide was a subject on everyone’s mind.

Present at this meeting was a Turner Middle School student, a victim of bullying, who admitted that she and her best friend had made a pact to commit suicide this summer when she goes to visit. This young person also made perhaps the most telling comment of the evening about the programs at school, “They are always talking to us, they don’t listen.”

Most of these parents felt that the programs in place were not helping their children and that their needs were being ignored by the school district and administrators. These concerned parents now find themselves under attack and their motives questioned. Unfortunately, it is not uncommon in the world of abuse for the victims to be blamed. In a way, they too are becoming the victims of bullying. The perception by some parents was that the school district was “circling its wagons” to defend itself rather than trying to address the problem. We need to remember Leonard Sherman’s motto, “Our business is kids,” and get down to business. It is difficult to deny that there is a problem when so many children in Berthoud are attempting to or are considering taking their own lives.

The organizers of these roundtables for parents feel that their cause is best served by documenting the incidents that they and their children have gone through. They also feel that there are others who have not told their stories. If you have a situation to share, you may contact Brenda Peacock at blpeacock@comcast.net [14].

Read more on this meeting at Berthoud Town Forum [15]: