On June 3, 2016 at approximately 8:57 PM, Larimer County Sheriff’s Deputies responded to a report of a stabbing in the area of Rist Canyon Road and Larimer County Road 23E Belluvue, Colorado. It was reported that a female was stabbed in the neck area and the hands. The male suspect was still in the area and one witness to the incident held the suspect at gunpoint while he was on the phone with Emergency Dispatch Operators. Once deputies arrived the male failed to follow commands and became combative. The suspect was tased and a physical struggle ensued. The suspect was taken into custody.

Subsequent investigation revealed that the victim and suspect, who know each other, were traveling in a vehicle when an argument started. The victim who was driving pulled over and excited the vehicle and was calling 911when the suspect attacked her with the knife. 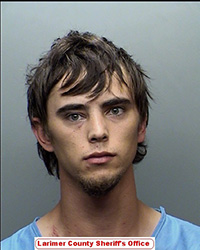 The suspect was identified as Evan Shockley (061493). Shockley was arrested and booked into the Larimer County Jail on the following allegations:

The charges are merely an accusation and the defendant is presumed innocent until, and unless, proven guilty.