The guest speaker for Friday, November 19 is Mark Shannon from Ball Aerospace in Boulder. His talk will be on the Wide-field Infrared Survey Exployer [2] (WISE) mission.

[1]WISE is a NASA-funded Explorer mission that will provide a vast storehouse of knowledge about the solar system, the Milky Way, and the Universe. Among the objects WISE will study are asteroids, the coolest and dimmest stars, and the most luminous galaxies.

Mark Shannon, the WISE Spacecraft System Engineer from Ball Aerospace, will present an overview of the WISE spacecraft and some of the recent science results from the WISE mission. WISE is an unmanned satellite carrying an infrared-sensitive telescope that will image the entire sky. Since objects around room temperature emit infrared radiation, the WISE telescope and detectors are kept very cold (below -430° F /15° Kelvin, which is only 15° Centigrade above absolute zero) by a cryostat — like an ice chest but filled with solid hydrogen instead of ice.

Solar panels will provide WISE with the electricity it needs to operate, and will always point toward the Sun. Orbiting several hundred miles above the dividing line between night and day on Earth, the telescope will look out at right angles to the Sun and will always point away from Earth. As WISE orbits from the North pole to the equator to the South pole and then back up to the North pole, the telescope will sweep out a circle in the sky. As the Earth moves around the Sun, this circle will move around the sky, and after six months WISE will have observed the whole sky. 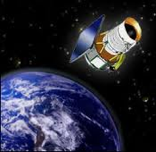 [3]As WISE sweeps along the circle a small mirror scans in the opposite direction, capturing an image of the sky onto an infrared sensitive digital camera which will take a picture every 11 seconds. Each picture will cover an area of the sky 3 times larger than the full Moon. After 6 months WISE will have taken nearly 1,500,000 pictures covering the entire sky. Each picture will have one megapixel at each of four different wavelengths that range from 5 to 35 times longer than the longest waves the human eye can see. Data taken by WISE will be downloaded by radio transmission 4 times per day to computers on the ground which will combine the many images taken by WISE into an atlas covering the entire celestial sphere and a list of all the detected objects. (for more on WISE and some early images go to Science Daily [4])

Weather permitting after the presentation, visitors will be invited to look through our large telescope at various celestial objects. Public star nights are held the third Friday of each month (except July, when we are closed for annual maintenance). No reservations are necessary for these nights. Just come and join us for the talk and some observing afterwards. If you have any questions, please call the observatory information line at 970-613-7793 or check the LTO web site at: www.starkids.org [1]