Since Galileo invented the telescope over 400 years ago, people have built ever larger instruments that probe deeper into space. Today, the greatest collection of astronomical telescopes ever assembled sites atop Mauna Kea, one of five volcanoes forming Hawaii’s Big Island and the highest point in the central Pacific. In this talk, Dr. Gregory Wirth explains how this remote location came to be home to the CFHT, Gemini, Subaru, and Keck telescopes and how astronomers are using these telescopes to study the cosmos.

Dr. Gregory Wirth grew up in central Michigan and marveled at the nighttime sky despite the clouds and light pollution of his hometown. He studied Physics, Astronomy, and Applied Math at 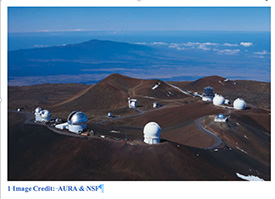 Northwestern University (Evanston, IL), then earned his Ph.D. in Astronomy & Astrophysics at the University of California, Santa Cruz while observing with the telescopes of the historic Lick Observatory, the nascent Keck Observatory, and the newly-launched Hubble Space Telescope.

Following a postdoctoral appointment at the University of Victoria (BC, Canada), Greg joined the staff of Hawaii’s W. M. Keck Observatory as an instrument specialist. Over 16 years at Keck, he served as the primary support scientist on the LRIS, DEIMOS, ESI, and KCWI optical spectrometers, co-led Keck’s public outreach and education efforts, and studied the evolution of galaxies in rich clusters. He left Hawaii in 2014 to lead the science commissioning effort for the National Ecological Observatory Network (NEON), a Boulder-based groundbreaking “big-data” project of the National Science Foundation to gather unprecedented data on the state of the environment across the U.S. With NEON now built, Greg is taking a new position with Ball Aerospace and hopes to contribute to Ball’s space astronomy projects. He and his family are Longmont residents.