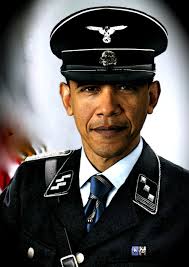 On June 19, 2013, US President Obama, hoping to raise himself above the developing National Security Agency (NSA) spy scandals, sought to associate himself with two iconic speeches made at the Brandenburg Gate in Berlin.

Obama’s speech was delivered to a relatively small, specially selected audience of invitees. Even so, Obama spoke from behind bullet proof glass.

Obama’s speech will go down in history as the most hypocritical of all time. Little wonder that the audience was there by invitation only. A real audience would have hooted Obama out of Berlin.

Perhaps the most hypocritical of all of Obama’s statements was his proposal that the US and Russia reduce their nuclear weapons by one-third. The entire world, and certainly the Russians, saw through this ploy. The US is currently surrounding Russia with anti-ballistic missiles on Russia’s borders and hopes to leverage this advantage by talking Russia into reducing its weapons, thereby making it easier for Washington to target them. Obama’s proposal is clearly intended to weaken Russia’s nuclear deterrent and ability to resist US hegemony.

Obama spoke lofty words of peace, while beating the drums of war in Syria and Iran. Witness Obama’s aggressive policies of surrounding Russia with missile bases and establishing new military bases in the Pacific Ocean with which to confront China.