In every facet of life, success breeds confidence. The world of sports is certainly no exception.

After having notched five consecutive victories, the Berthoud High girls basketball team has plenty of reason to be brimming with confidence. The Lady Spartans’ latest victims were the Estes Park LadyCats whom Berthoud dispatched 53-36 Monday evening on the BHS hardwood. 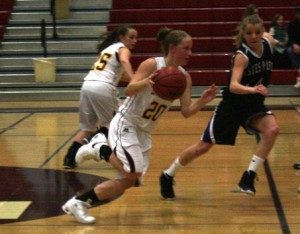 [1]
Berthoud's Kendall Baker races down court on a fast break

Asked if his team had found some secret recipe for success, Coach Earl explained that the winning streak has been born out of playing sound fundamental basketball and feeding off of strong team chemistry, “Since the streak began, it’s the been same things – playing good team defense and playing good team offense. We pass the ball around and get it to the open person and we score and it just goes and goes.”

Monday night’s win was another example of Berthoud playing solid basketball on both ends of the floor. The Lady Spartans’ 53 points on 59% shooting was their second-highest scoring total of the 2011-12 season, seven players contributed points and Berthoud was whistled for only ten team fouls. The Lady Spartans also swiped five steals and notched 24 rebounds.

The key to the home team’s success was their ability to regularly beat the Estes Park full-court press. Crisp passing from guards Sammie Kouns and Kendall Baker got Berthoud down the floor quickly for several easy lay-ups. One of the fast breaks resulted in a three-point play by Fagler as the senior forward sank a lay-up as she was fouled and swished the resulting free-throw.

Berthoud continued to frustrate Estes in the second period by holding the LadyCats without a bucket for the first 3:10. Estes was, however, able to go on a bit of a run before halftime. LadyCat senior center Evelyn Bangs scored on three consecutive possessions as part of her game-high 17 points. Despite the late charge by Estes, Berthoud took a commanding 31-14 lead into the locker room at halftime. 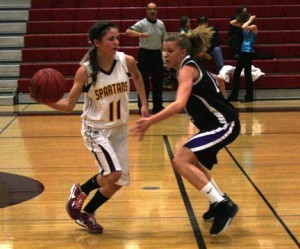 Berthoud built on their lead in a slow-moving and low-scoring third period. Baker drained both of her, and Berthoud’s, two free-throws in the period; the Spartans finished their night 4/5 from the stripe.

Estes, to their credit, did not throw in the towel in the fourth period despite trailing by 25 at one point, 45-20. The LadyCats put together a 10-2 scoring run in the middle of the period but Berthoud junior Savanna Pague scored eight points of her own and put the game well out of reach for Estes Park.

Berthoud now sits in fourth place in the 3A Patriot League with a 6-2 conference record. The season winds down in a hurry for Berthoud with three games in four nights this week before the regular season finale on February 14 against Greeley-based University High School.

The BHS boys basketball team did not fare as well as their female counterparts on Monday night. Despite a game-high 19 points from senior guard Zach Ruebesam, the Spartans lost their game in Estes Park by a razor-thin 63-61 margin. The loss drops Berthoud back to .500 in both 3A Patriot League play (4-4) as well as on the season overall (8-8).