LOVELAND, Colo. – The Missouri Mavericks scored three goals in the third period to defeat the Colorado Eagles, 7-4, capping off a three-games-in-as-many nights series between the teams that had a fitting playoff feel. After each team had won one of the previous two games in overtime, Simon Watson helped lead the Mavs to the “rubber-match” win with a pair of goals.

A back-and-forth first period saw the Mavs start the scoring at 4:33. Mike Wakita took a shot from the top of the right circle that Kyle Jones kicked to his right, but it went directly to a wide open Watson for an easy opening score.

The Eagles tied the game midway through the opening frame when Kevin Ulanski sent a pass from the goal line in the left corner to Dan Sullivan, who had snuck behind the Missouri defense into the low slot. Sullivan made a quick move to his backhand before roofing the puck past Gerry Festa. 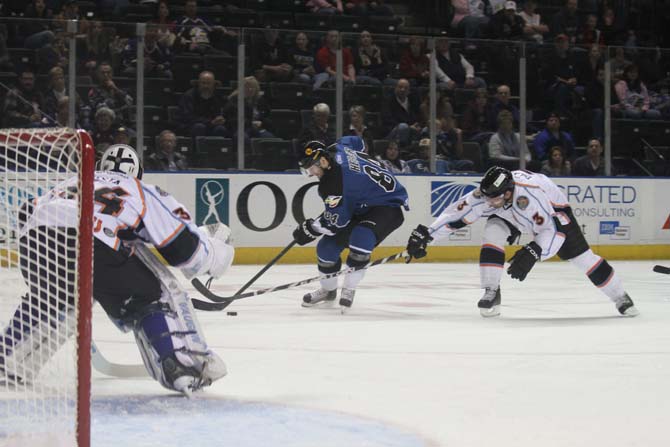 [1]
Mavs defenseman Ray DiLauro goes for the puck as Andrej Hebar head for the net. Photo by Samantha Baker

Missouri went back up, 2-1, at 14:46 when Blake Forsyth sent a long lead pass to Todd Griffith, sending the newly-acquired forward down the left wing. Griffith made a deft move around an Eagles defender before cutting across the doorstep and sliding the puck past Jones inside the far post.

But Colorado countered just over half a minute later to knot the score back up at 2. The team’s top line was again responsible for the tally as Sullivan and Riley Nelson worked a tic-tac-toe play on an odd-man rush to set up Ulanski for an easy goal from the doorstep.

The see-saw action continued in the second stanza. Colorado went on top 3-2 at 3:18 after Steve Haddon made a great, determined play — playing the puck from his knees in the left circle — to set up Adam Chorneyko for a one-timer past Festa. 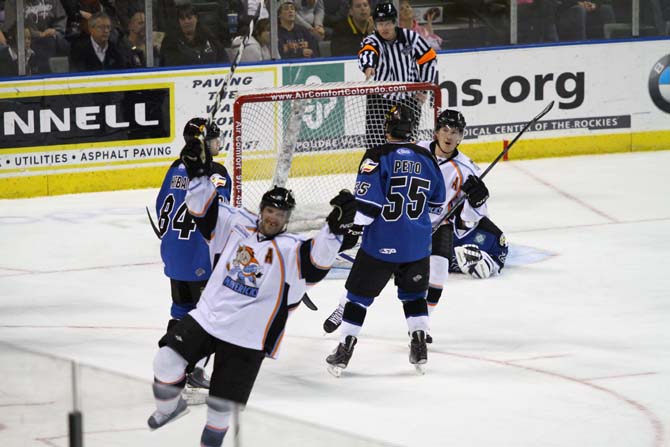 [2]
DiLauro's momentum-shifting goal at the end of the 2nd. Photo by Michael Kalush

But at 4:20, Ray DiLauro sent a pass from the left point to a wide open Watson between the hash marks for his second goal of the game. In an odd move, Robby Nolan replaced Festa in Missouri’s net after their own goal. The Eagles went back up at 6:58 when Nelson placed a laser of a shot into the top left corner of the goal directly off a faceoff win in the right circle.

Moments later, it appeared that Colorado had made it 5-3, but Scott May had a goal waived off. And at 18:05, the Mavs would tie the game back up at 4 after Ryan Jardine forced a play down deep with the rebound coming out to DiLauro in the slot for a shot past Jones.

Missouri got the game-winner at 5:39 of the final frame when Nick Sirota curled up along the right wing and fed Mike Berry crashing the net. And just 17 seconds later, Nathan O’Nabigon made it 6-4 with a great individual effort, stealing the puck at his offensive blue line before beating Jones with a shot from the high slot. The Mavs put the game out of reach with a power-play goal at 16:29 when Sirota scored from the left mid-boards.

The Eagles’ next game will come Tuesday night in Rapid City, after which they’ll finish out February with four games at home. 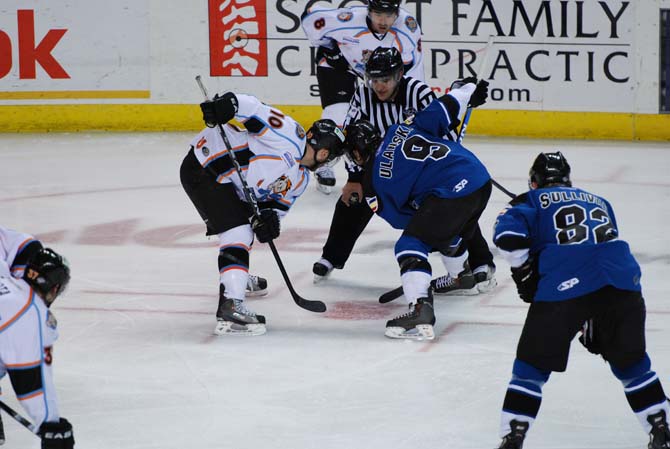 [3]
Kevin Ulanski and Mike Berry face of in the final period. Photo by Lisa Fisbeck