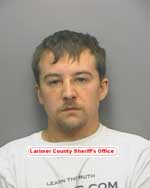 The Larimer County Sheriff’s Office SWAT team was called in and was forced to deploy tear gas in order to remove the suspect from the residence which was done without injury.  Clifford Arthur Burkholder, DOB: 051382, of Wellington, was arrested for:

All offenses listed are misdemeanors.

The suspect was taken to the Larimer County Jail where he remains pending a court hearing to determine his bond.

The charges are merely an accusation and the defendant is presumed innocent until and unless proven guilty.