It’s Time to be Honest: The Tea Party Has Become a Terrorist Group  [2] 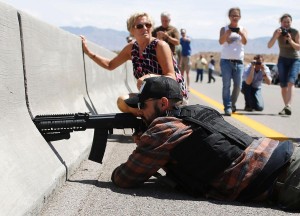 [2]While I’m sure many liberals who come across this headline will have some response like “Duh” or “Tell me something I didn’t already know, ” I think it’s time to put hyperbole aside and get real for a moment.

They’ve done everything possible to hold our country back economically, threatened to force our country to default on our debt for the first time in history, shut down the government and have wasted millions of taxpayer dollars blatantly trying to sabotage the Affordable Care Act.

But as time goes on, more of these tea party politicians are speaking out against civil rights (even suggesting the Civil Rights Act is unconstitutional), pushing for laws that allow for religious discrimination and the anti-government rhetoric continues to expand within the Republican party

Take for instance the escalating standoff in Nevada where anti-government activists came armed, talked about a strategy to use women as human shields, and Cliven Bundy apparently brought in his whole family (including his 54 grandchildren) to his location in anticipation of possible government action against him for violating federal law.