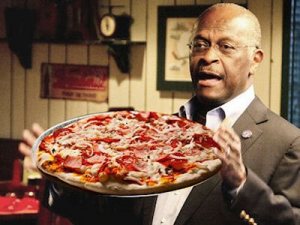 Here’s a list of ten Herman Cain scandals that the corporate media is ignoring.

1.
Cain did not deliver at Godfather’s Pizza. From 1985, the year before  Cain was appointed to run Godfathers to 1995 when he left, adjusted for  inflation, Godfather’s sales were down over 40%.
See Complete Godfather’s Pizza Sales Figure from the Herman Cain Years [3]

2.
Cain claims that Godfather’s Pizza was on the edge of bankruptcy when  he took over the company. Actually, it was the fourth largest selling  Pizza Chain in America and had made profits in at least 10 years out of  11 when he took it over. According to Cain it lost 1.5 million the year  before he took it over. The previous president claimed it was going to  break even. It was also projected to possibly make 16 $million the year  he took it over. It apparently made nothing the first two years under  Cain. The company was probably worth between $100 – $150 million when  Pillsbury took it over and gave it to Cain. Under Cain, its value fell  to $30-40 million in 2 1/2 years.
See Checking the Fact Checkers on Herman Cain and Godfather’s Pizzas [4]

3.
Pillsbury and Cain were both very optimistic about the Godfather’s  franchise, when he took over. They were expecting  big profits. Cain  kept on putting out optimistic projections and constant statements that  he was turning the company around. After two years, Pillsbury caught on  and realized Cain had failed to make any real profits and decided to  sell the company.
See Checking the Fact Checkers on Herman Cain and Godfather’s Pizzas, Part 2 [5]