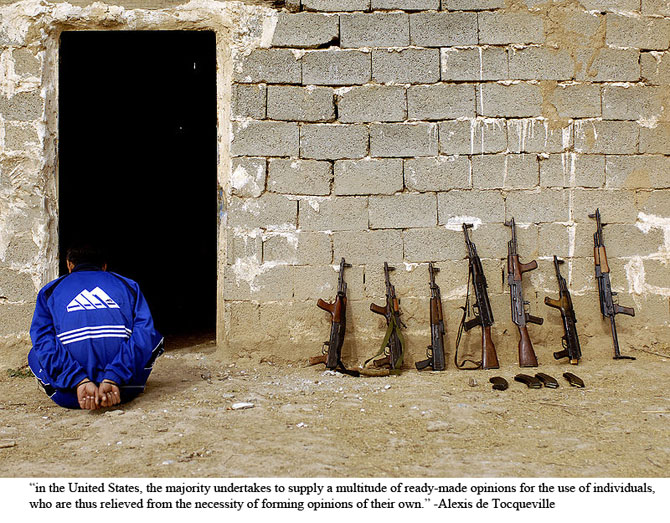 The shock of 9/11 and the rapid appearance of success in ousting the Taliban presented George W. Bush with political power few U.S. presidents have enjoyed. Bush’s approval rating shot up to an astounding 90 percent in the aftermath of the largest-ever terror attack on Americans. Less than a year later, the Republican Party picked up eight House seats and control of the Senate — one of the few times in history the president’s party posted gains in a midterm election.

Lie by lie, [3] the Bush administration fed the public’s paranoia and built its case for war.

The week before the invasion of Iraq on March 19, 2003, Bush’s approval rating was at 58 percent. A week later it was at 71. It hovered well above 50 percent until Saddam Hussein was captured on December 13, 2003. Bush was re-elected in November, 2004 with approval at just about 50 percent, then his popularity then began a slow decline — hitting a nadir of 25 percent during the last few months before he left office in 2008.

The recognition that Iraq was a horrendous failure came slowly to the majority of Americans. As it became clear the insurgency was not in fact in its “last throes, [4]” complaints focused on the lack of armor and supplies for the solidiers. Republicans such as John McCain fixated on the tactics and the need for more ground forces. Eventually hawkish Democrats who supported the war began to turn, led by Congressman John Murtha, who on November 17, 2005 introduced a resolution that called for U.S. troops to be “redeployed at the earliest practicable date.”

But by then the human costs and blowback of the war, along with the neglect of Afghanistan, were obvious to everyone except diehard neoconservatives. The public’s reaction to the Bush administration’s mishandling of a doomed war played a major role in the Democratic Party’s takeover of Congress in 2006, led by antiwar leaders Democratic National Committee chair Howard Dean and congresswoman Nancy Pelosi (D-CA).

We’ve given credit to some of those who opposed the war when it was unpopular to do so. [5] Though those of us who lived through this sad chapter in American history know many of the names of those who led us into the Iraq War, it’s worth calling them out again.

Editor’s Note: As a 30 year Air Force Officer who served from Viet Nam to Desert Storm, including many years of executing war plans and serving on the Joint Staff, I was opposed to this war from the beginning.