As Southern whites sink into economic despair, more and more are retreating into a fictional past.

On a windy afternoon a few days ago I went to a depressed section of North Memphis to visit an old clapboard house that was once owned by a German immigrant named Jacob Burkle. Oral history—and oral history is all anyone has in this case since no written documents survive—holds that Burkle used his house as a stop on the underground railroad for escaped slaves in the decade before the Civil War. The house is now a small museum called Slave Haven [3]. It has artifacts such as leg irons, iron collars and broadsheets advertising the sale of men, women and children. In the gray floor of the porch there is a trapdoor that leads to a long crawl space and a jagged hole in a brick cellar wall where fugitives could have pushed themselves down into the basement. Escaped slaves were purportedly guided by Burkle at night down a tunnel or trench toward the nearby Mississippi River and turned over to sympathetic river traders who took them north to Cairo, Ill., and on to freedom in Canada.

Burkle and his descendants had good reason to avoid written records and to keep their activities secret. Memphis, on the eve of the Civil War, was one of the biggest slave markets in the South. After the war the city was an epicenter for Ku Klux Klan terror that included lynching, the nighttime burning of black churches and schools and the killing of black leaders and their white supporters, atrocities that continued into the 20th century. Martin Luther King Jr. was assassinated in Memphis in 1968. If word had gotten out that Burkle used his home to help slaves escape, the structure would almost certainly have been burned and Burkle or his descendants, at the very least, driven out of the city. The story of Burkle’s aid to slaves fleeing bondage became public knowledge only a couple of decades ago. 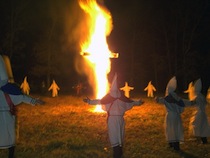 [4]The modest public profile of the Burkle house stands in stunning contrast with the monument in the center of Memphis to native son Nathan Bedford Forrest. Forrest, who is buried in Forrest Park under a statue of himself in his Confederate general’s uniform and mounted on a horse, is one of the most odious figures in American history. A moody, barely literate, violent man—he was not averse to shooting his own troops if he deemed them to be cowards—he became a millionaire before the war as a slave trader. As a Confederate general he was noted for moronic aphorisms such as “War means fighting and fighting means killing.” He was, even by the accounts of those who served under him, a butcher. He led a massacre at Fort Pillow [5] in Henning, Tenn., of some 300 black Union troops—who had surrendered and put down their weapons—as well as women and children who had sheltered in the fort. Forrest was, after the war, the first grand wizard of the Ku Klux Klan. He used his skills as a former cavalry commander to lead armed night raids to terrorize blacks.

Forrest, like many other white racists of the antebellum South, is enjoying a disquieting renaissance. The Sons of Confederate Veterans and the West Tennessee Historical Commission last summer put up a 1,000-pound granite marker at the entrance to the park that read “Forrest Park.”