White Elephant or Diamond in the Rough

[1]Once the crown jewel of downtown Loveland, this magnificent structure has fallen on hard times. When the community center was built during the depression years, its magnificent maple floors, a stage for productions and seating for over 500 people in a town with a population of less than 6,000 made Loveland the envy of the country.

The project was built as a Works Progress Administration project on land donated by D.T. and Lillian Pulliam, who also donated $20,000 for the construction, the equivalent of $300,000 today.

The building was to serve as a civic and cultural center for the “uplift of the community.” It did that job well for many years as the venue for the Loveland Chamber Orchestra and the Loveland Community Theater. It even served as the City Hall for a time.

When the Rialto Theater was restored, its canted floor was better for stage productions. The massively thick concrete walls of the building made if very sturdy, but also made it difficult to modernize the venue. The lack of airconditioning became a problem as window units were used in the offices but there was no way to cool the main hall. A ramp was added to the front to provide handicapped access, but it makes only the main floor available.

The Loveland service clubs have met in the basement and the community theater rehearses on the stage, but most modern Lovelanders have never seen the inside of the Pullium Building.

A dedicated group of civic minded citizens is trying to change that. They feel that with the appropriate changes the building can once again be a vibrant part of downtown and the community. 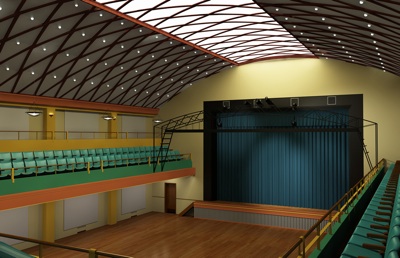 [2]
The auditorium repurposed as a multi-use facility.

Changes inside and out will restore its beauty and increase its functionality. The best place to learn what is planned for the building is the group’s website at www.pulliambuilding.org [3]. There you can watch a video outlining the building’s history and what needs to be done to bring it into the 21st Century. The group envisions the huge main hall becoming a setting for dances and banquets that will bring people downtown.

The Pulliam Building is also open for the Loveland Historical Society’s Historic Homes Tour [4]this Saturday from 10 a.m. to 2 p.m. Come see this dowager and envision how she may once again become a princess.