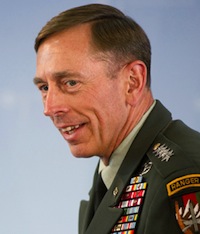 Much is being made about the spectacular fall from grace of one of our nations most respected military icons. The real scandal is not that David Petraeus [2]had feet of clay, but that he managed to convince the country, up to and including the President of the United States that he was a man of vision, integrity and ability.

I really had not paid much attention to General Petraeus, generally feeling that the confidence placed in him must be warranted. That changed this last weekend while listening to NPR wax eloquent about how he invented counter insurgency (COIN) techniques used in Iraq and Afghanistan. This showed how little the media knows about the military. We were taught the same counter insurgency doctrine during Viet Nam, while Petraeus was still in high school. For various reasons, the tactic it did not work in Vietnam. Incidents such as the saga of Lt. William Calley’s company machine-gunning an entire Vietnamese village [3] can negate a lot of positive feelings.

While I was against these wars in Iraq and Afghanistan, I was hopeful that our military had learned the lesson from Vietnam and would be successful in the village pacification that is an integral part of the counter insurgency doctrine. Unfortunately, as I have stated to my wife numerous time over the last several years, we have failed in both arenas. A little research showed that Petraeus’s reputation was built on his advocacy of the COIN doctrine and the co-authoring a military field manual on the techniques. He is considered the expert in counter insurgency and apparently has convinced a great many people that it was successful in Iraq and Afghanistan and that he, was responsible for those successes.

In fact, it was not successful and he basically covered-up the lack of success and promoted an alternate universe in which he was the hero of the day.

Petraeus is noted for his meteoric rise, what we called a “fast burner” in the military. Fast burners usually were not promoted on ability, but rather on their political acumen. It appears that Petraeus has spent much, if not most, of his career in academia and staff positions and relatively little in actual command. Strangely, the mainstream media is still fawning over the General and downplaying his peccadillo. There is plenty of evidence that his weakness overshadow his strengths and that the country will be better off without his presence.

The Sins Of General David Petraeus [4]
Petraeus seduced America. We should never have trusted him.
By Michael Hastings [5] BuzzFeed Staff

The fraud that General David Petraeus perpetrated on America started many years before the general seduced Paula Broadwell, a lower-ranking officer 20 years his junior, after meeting her on a campus visit to Harvard.

More so than any other leading military figure, Petraeus’ entire philosophy has been based on hiding the truth, on deception, on building a false image. “Perception” is key, he wrote in his 1987 Princeton dissertation: “What policymakers believe to have taken place in any particular case is what matters — more than what actually occurred.”

Yes, it’s not what actually happens that matters — it’s what you can convince the public it thinks happened.

Until this weekend, Petraeus had been incredibly successful in making the public think he was a man of great integrity and honor, among other things. Most of the stories written about him fall under what we hacks in the media like to call “a blow job.” Vanity Fair. The New Yorker. The New York Times. The Washington Post. Time. Newsweek. In total, all the profiles, stage-managed and controlled by the Pentagon’s multimillion dollar public relations apparatus, built up an unrealistic and superhuman myth around the general that, in the end, did not do Petraeus or the public any favors. Ironically, despite all the media fellating, our esteemed and sex-obsessed press somehow missed the actual blow job.

Before I lay out the Petraeus counter-narrative — a narrative intentionally ignored by most of the Pentagon press and national security reporters, for reasons I’ll soon explain — let me say this about the man once known as King David, General Betray-Us, or P4, by his admirers, his enemies, and his fellow service members, respectively. He’s an impressive guy, a highly motivated individual, … READ MORE [4]

The David Petraeus clown car [8] extravaganza that’s entertaining [9] the country these days serves the useful purpose of distracting people from taking a hard look at the nature of the national security state we’ve become.  Comically hoist by his own petard, former General Petraeus is arguably just another of our war criminals [10] who will never be held to account.

Some say the FBI never should have been looking at his email in the first place.  Glenn Greenwald articulated this argument clearly as clearly as anyone on DemocracyNOW [11], where he complained that:

“the FBI, based on really no evidence of any actual crime, engaged in this massive surveillance effort of, first, obtaining all kinds of intimate and private information about two women, one of whom complained, one of whom was the target of the complaint, Paula Broadwell and Jill Kelley; learned the locations and email accounts of Paula Broadwell, who was the subject of this fairly innocuous complaint; read through all of her emails; learned the identity of her anonymous lover, David Petraeus; likely read–certainly read through all of her emails, probably read through his; and then, in the process, as well, learned about an affair between the complainant, Jill Kelley–or not an affair, but inappropriate communications, as they’re calling it, and the four-star general in Afghanistan, General Allen; and then obtained 20,000 to 30,000 pages of emails between them, as well.

This mangles the seminal moment in this sequence of event, which was when Jill Kelley complained to her FBI friend.  At that moment, apparently, all that was known was that there were harassing, anonymous emails to Kelley, referencing the Director of the CIA, whom she knew, and referencing information about the CIA director that was supposedly confidential.  At that seminal moment, the sketchy evidence was that someone had breached CIA security, and maybe it was trivial or even a false impression, but no professional FBI agent could responsibly let that go.  … READ MORE [6]

The Petraeus Legacy: A Paramilitary CIA? [12]

By Jeremy Scahill [13]
While much of the media focus on l’affaire Petraeus has centered on the CIA director’s sexual relationship with his biographer, Paula Broadwell, the scandal opens a window onto a different and more consequential relationship—that between the CIA and the military’s Joint Special Operations Command. In a behind-the-scenes turf war that has raged since 9/11, the two government bodies have fought for control of the expanding global wars waged by the United States—a turf war that JSOC has largely won. Petraeus, an instrumental player in this power struggle, leaves behind an agency that has strayed from intelligence to paramilitary-type activities. Though his legacy will be defined largely by the scandal that ended his career, to many within military and intelligence circles, Petraeus’s career trajectory, from commander of US military forces in Iraq and Afghanistan to the helm of the CIA, is a symbol of this evolution.

“I would not say that CIA has been taken over by the military, but I would say that the CIA has become more militarized,” Philip Giraldi, a retired career CIA case officer, told The Nation. “A considerable part of the CIA budget is now no longer spying; it’s supporting paramilitaries who work closely with JSOC to kill terrorists, and to run the drone program.” The CIA, he added, “is a killing machine now.”

As head of US Central Command in 2009, Petraeus issued execute orders that significantly broadened the ability of US forces to operate in a variety of countries, including Yemen, where US forces began conducting missile strikes later that year. During Petraeus’s short tenure at the CIA, drone strikes conducted by the agency, sometimes in conjunction with JSOC, escalated dramatically in Yemen; in his first month in office, he oversaw a series of strikes that killed three US citizens, including 16-year-old Abdulrahman Awlaki. In some cases, such as the raid that killed Osama bin Laden in Pakistan, commandos from the elite JSOC operated under the auspices of the CIA, so that the mission could be kept secret if it went wrong.

One current State Department liaison who has also worked extensively with JSOC describes the CIA as becoming “a mini-Special Operations Command that purports to be an intelligence agency.” READ MORE [12]