Republican presidential candidate Ron Paul has created a great deal of controversy with his libertarian views. He has caused much turmoil both in the conservative camp and among liberals. It appears however, that only liberals are willing to talk about his views. The fact that so many of his views are also espoused by true liberals illustrates how the far right is sometimes nearly indistinguishable from the far left.

Several respected liberal writers have taken up the issue, but the comments by Nathan Fuller (link below) are among the most thoughtful. He also includes links to other writers should the reader wish to examine some of the comments more closely. Fuller is responding to comments in “Glenn Greenwald on Ran Paul: Why Worldview Matters.”

The main attraction of Ron Paul is his commitment to stopping what seems to be the United States involvement in endless war, a view that is likely attractive to much of the electorate regardless of their political leanings. Unfortunately, is appears not to be attractive to most political candidates. I believe that readers of the entire spectrum of political thought will find Fuller’s thoughts insightful. Additionally, the comments on this site are also studied and reasoned and do not contain the vitriol so often surfacing in reader comments.

A Response to Taryn Hart.

As his infamous newsletters resurface, as he gains national support, and as the Iowa caucus is held today, Ron Paul is all over the damn Internet, especially in progressive circles. Matt Stoller [1], Mike Tracey [2], Robert Scheer [3], and Glenn Greenwald [4] – among many others – have all written compelling pieces on the liberal debates surrounding the noted libertarian.

Taryn Hart, who blogs at Plutocracy Files [5] (whose Occupy Wall Street interview work I recommend), joins the discussion to critique [6] Greenwald’s article, and since she requested my thoughts, I’ll provide them here. The piece is called “Glenn Greenwald on Ron Paul: Why Worldview Matters.”

A preliminary reminder: Hart is not among the primary targets of Greenwald’s piece. The article, entitled “Progressives and the Ron Paul fallacies,” first and foremost takes aim at progressives who support Obama over Paul and continue to tout their anti-war credentials. As Hart makes explicitly clear in her first footnote, she does not “support Obama nor justify his actions as President.” Hart has claimed she is considering not voting, and I hope she revisits that discussion soon.

But she is a progressive, and the question of support for Paul, or at least his candidacy, remains. Hart’s criticism of Greenwald’s argument goes like this:

Specifically, Greenwald’s argument assumes that all that matters is a candidate’s positions on isolated issues – as if it’s just a matter of creating a ranked pro and con list for each candidate and crunching the numbers.

Greenwald suggests choosing between the candidates is just a matter of prioritizing a limited list of isolated issues. However, it’s not just a candidate’s positions on individual issues that are important**; what’s also important (in most instances more important) is the candidate’s worldview. A President’s worldview will determine the outcome of thousands of decisions the President will make, almost all of which will not be campaign issues and many of which are unforeseeable.

First, I take issue with the “isolated issues” claim – one I think trivializes progressives’ stance. Paul opposes our current wars (hot, cold, covert, on drugs, and on whistleblowers), opposes imperialism, has called American corporatism a route to “soft fascism,” supports Bradley Manning and WikiLeaks, has praised Occupy Wall Street, and opposes the Patriot Act and the growing surveillance and police state. These are many issues that progressives (especially under Bush) have supported in the past, and they are hardly isolated – reducing the military-industrial complex would reduce our national deficit, removing our troops from the Middle East and ending support for Israeli apartheid would have drastic effects in global relations, to comment on just two. … 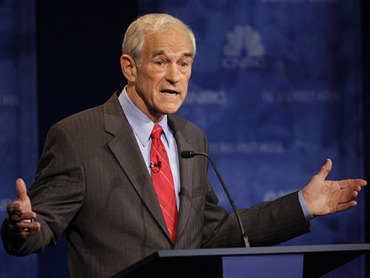