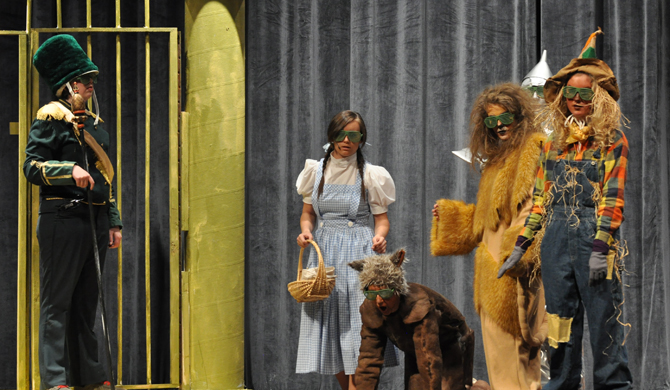 The Berthoud High School drama department will premiere a production of The Wonderful Wizard of OZ on Thursday April 14. The play is an adaptation the book by L. Frank Baum and looks to be a good time with many experienced actors.

Casting for the play began in late February and the actors began practicing scenes in March. The cast has been rehearsing three times a week and will hold their dress rehearsal this Tuesday.

Colorful costumes, delightful makeup and intriguing sets will make a delightful evening of entertainment as the audience follows Dorothy and Toto on their adventure thought the land of Oz. Everyone knows the story, so there is no surprise here. The joy is watching the enthusiasm and polish of the student actors as they lead us on this journey. Clara Levy does a wonderful job convincing us that she is made of straw and Graham Lier clunks with the best of the Tin Woodsmen. Maggie Stamets is gorgeous in her lion makeup and looks suitably downcast when Dorothy scolds her for frightening Toto. Dylan Brown as Toto certainly has his work cutout for him as he has to do the entire production on all fours.

Stage manager, Leigh Ann Kelber began working on the production at the beginning of April and has helped with the lighting, sound and special effects. Kelber has worked on previous productions for Berthoud High Schook, so she has experience working in live theater. She stated the greatest challenge of working on plays for BHS is using older equipment. She has been tested in figuring out unique solutions to the problems that arise.

Many of the actors are returning to the stage including senior Katie Kouns, who plays the Wicked Witch of the West Kouns had been in eight previous plays with BHS, and says she is exited to do her final play at BHS. “My favorite part of working on this play is that it gives me the chance to go out on my last play.”

The entire cast is enthusiast about the play and it shows. This promises to be a delightful evening of entertainment. Come and support our kids, you won’t be sorry.

The Cast and Crew