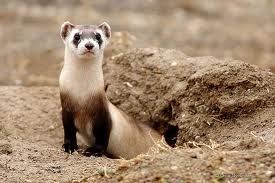 [1]Thirty years ago something remarkable happened on a ranch outside of Meeteetse, Wyoming.  A black-footed ferret, a small nocturnal carnivore thought to be extinct, was found by John and Lucille Hogg’s dog Shep.  This event led to the dramatic discovery of a small group of about 130 black-footed ferrets and offered a ray of hope for the species.

Research conducted on the Meeteetse population provided important new information on the life history and behavior of this secretive mammal.  Tragically, outbreaks of canine distemper and probably sylvatic plague nearly killed all of the Meeteetse ferrets.  The remaining 18 individuals were taken into captivity between 1985 and 1987 in an effort to save the species.  At that time, these last known ferrets were the rarest mammals on earth and the fate of North America’s only native ferret species was unclear.

The Black-footed Ferret Recovery Program is celebrating two major milestones this year: the 30th Anniversary of the species rediscovery and the 20th Anniversary of their successful return to the wild.  The recovery team includes partners from federal, state and tribal agencies as well as private landowners, the Zoo community and many non-government organizations. “The successful return of the black-footed ferret to the prairie ecosystem of North America has truly been a collective effort,” said Steve Guertin, Region 6 Director.  “To know that we came so close to losing this species and now have about 1,000 black-footed ferrets in numerous sites throughout their historic range–it’s encouraging.”

This year a recurring renewal repeats itself as kits are born in successfully established wild populations and  at the U.S. Fish and Wildlife Service’s National Black-footed Ferret Conservation Center in northern Colorado and the National Zoo’s Smithsonian Conservation Biology Institute in Front Royal, Virginia.  Breeding facilities at the Cheyenne Mountain Zoo, Phoenix Zoo, Louisville Zoological Gardens and Toronto Zoo are also awaiting kits to be born in the coming weeks.  “The folks at the captive breeding facilities do a great job every year producing and preparing kits for reintroduction into the wild,” said John Emmerich, deputy Director of the Wyoming Game and Fish Department and Chair of the Black-footed Ferret Recovery Implementation Team.  “What started in Wyoming all those years ago has spread to seven other states as well as Mexico and Canada.  Field biologists release captive born kits at approved reintroduction sites and monitor wild born animals ensuring that the black-footed ferret will be around for future generations to enjoy,” stated Emmerich.

Black-footed ferret recovery partners remain optimistic that the species will ultimately be fully recovered.  However, there are several obstacles that need to be addressed.  Habitat loss primarily due to sylvatic plague, an exotic disease, continues to be a challenge for the recovery team.  “We’re working on a couple of innovative management tools, an oral vaccine to address plague and an incentive package for landowners, which will hopefully put us over the top when it comes to black-footed ferret recovery,” says Guertin.

To learn more about black-footed ferrets and efforts currently underway to recover the species from the brink of extinction please visit www.blackfootedferret.org.  The website also lists numerous events where the public can learn about the recovery program and view a live black-footed ferret.

The mission of the U.S. Fish and Wildlife Service is working with others to conserve, protect, and enhance fish, wildlife, plants, and their habitats for the continuing benefit of the American people. We are both a leader and trusted partner in fish and wildlife conservation, known for our scientific excellence, stewardship of lands and natural resources, dedicated professionals, and commitment to public service. For more information on our work and the people who make it happen, visit www.fws.gov. Connect with our Facebook page at http://www.facebook.com/USFWSMountainPrairie [2], follow our tweets at http://twitter.com/USFWSMtnPrairie [3], watch our YouTube Channel at http://www.youtube.com/usfws [4] and download photos from our Flickr page at http://www.flickr.com/photos/usfwsmtnprairie/ [5]