One Nation Under The Gun: Thousands Of Gun Deaths Since Newtown [2]

On the morning of his murder, Feb. 11, Devin Aryal, 9, dressed to the ticking of his race car clock. His collection of stuffed animals, won from those arcade claw games, stared back at him from their perch on his top bunk.

Devin [3] felt he had outgrown the cutesy animal prints that had adorned the walls of his Oakdale, Minn., bedroom. He was in fourth grade now, after all. Without telling anyone, he had yanked the prints off his walls one by one. He had yet to decide how to fill up the blank spaces.

The night before, Devin had watched the Disney channel and played with his pirate gear and a couple of toy dinosaurs on his mother’s bed. He snuggled with her on the couch and watched more television. This had become their sleepy ritual. He’d explain the plot of the television show they were watching, or recount the highlights of his day — a winning soccer goal, a new level beaten on one of his Nintendo DSi games.

“The morning was usual,” recalled Melissa Aryal, Devin’s mother. “We got up and we got ready. I dropped him off at day care at 7:45.”

On the seven-minute ride in their minivan, Aryal, 39, kept the radio off so she could talk with Devin. “He had so much to say,” she recalled. Their morning conversation always ended the same.

“I love you more,” he replied.

“He would always win that game,” Aryal said. “It always gave me a good feeling.

After a 34-year-old stranger [4] with a 9 mm pistol and a backpack full of bullets shot Devin in the head for no apparent reason, Aryal only hears her son in her dreams. She is wrecked by the world she wakes up to, a world without Devin. He has become, for her, a composite of memories, conversation and images. 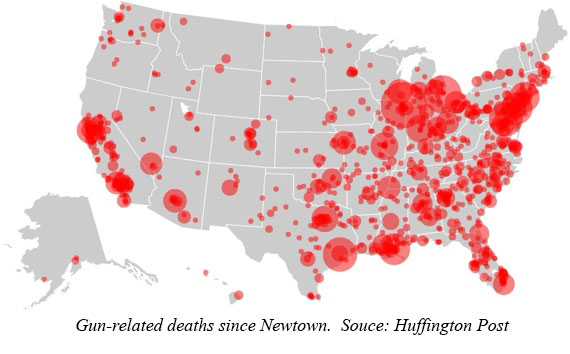 In the little more than three months since Newtown, there have been 2,243 gunshot killings and accidental deaths.

Apparently, there will be no ban on assault weapons.

Nor does it seem to make any difference that Jared Loughner — the man who shot Gabby Giffords and killed six others, including a 9-year-old girl — used a high-capacity magazine that the Clinton-era assault-weapons ban rendered illegal. A high-capacity magazine also enabled the massacre committed by Seung-Hui Cho, who killed 32 people at Virginia Tech.

The political climate has changed since the 1994 ban: Democrats have cowered before the gun lobby; the National Rifle Association has grown even more extreme;

That’s to say he sat in his second-floor office in the Missouri Capitol and sent out inaccurate information based on a whim [11] about an incident in a state building down the street he could barely see from his window. There was no crisis. There was no hostage. But that didn’t stop Mr. Kinder from doing what he could to incite fear.

So it should not be a surprise that the three-term lieutenant governor, who is probably getting extremely tired of being inconsequential, is at it again. Last week, Mr. Kinder held a news conference to bring attention [12] to a Stoddard County lawsuit that alleges officials from the Department of Revenue are sharing information requested in the process of obtaining a driver’s license with, gasp, the federal government.

The key here, of course, is that the information requested, in the case of a man named Eric Griffin, concerns a concealed weapon permit. Mr. Griffin was seeking to add a conceal-carry permit endorsement on his driver’s license, which is common.

By the National Memo Staff [14]

This week, Weekend Reader brings you Gun Guys [15], by Dan Baum. Gun Guys [15] offers an insightful and humorous look at the battle of guns and gun laws in the United States. Baum, a self-described “liberal gun owner,” provides readers with a varying look at the gun debate through a series of interviews and interactions with avid gun owners. Post-Newtown, gun-related violence has been under a microscope and determining effective laws has become a prevalent issue. The Senate is expected to vote on a gun bill in early April, which as of this week will unfortunately not include an assault weapons ban–something a majority of Americans are in favor of. Gun Guys provides the reader with a slightly different, more personal account of gun owners across the country.

The following is excerpted from Dan Baum’s Gun Guys. You can purchase it here [15].

I stepped up to position number 4 and, like a boy in the junior high gym shower, furtively looked over the other guys’ equipment. Out of six men shooting—two old guys like me and four in their thirties or younger—I was the only one with a traditional wooden rifle. Everybody else was shooting a black AR-15—the civilian version of the military’s M16. I might as well have been on the range at Fort Benning.

I’d seen these guns creeping into stores and ranges and had never understood the attraction. With their plastic stocks and high-tech man-killer look, they lacked the elegance of traditional firearms. The most common reason that people bought guns was for protection against crime, but shotguns and handguns were best for close-order shooting. The second most common reason was target shooting, like here at Cherry Creek. Hunting came third, but rarely with the AR-15. Most states didn’t allow the taking of deer with the tiny .223 bullet fired by the basic AR.

The AR was excellent at what it was designed for: killing people at medium range on the battlefield, which was not something the average retail gun buyer needed to do.