The Berthoud Spartans are grateful that high school basketball games run for only 32 minutes; if games lasted any longer the Spartans could very well have emerged from Friday night’s contest with Roosevelt as the losing team rather than the winning one.

The Spartans were able to hold off a fourth period rally by the visiting Roughriders to win the non-league contest by 58-55 final score. 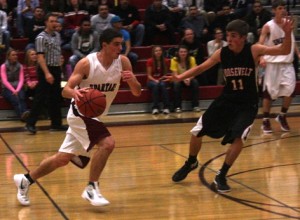 [1]
Mic Nienaber works his way around a Roosevelt defender

Berthoud began the fourth period with a 13-point advantage, 45-32, yet the Roughriders hung 23 on the Spartans in the final period, more than they scored in the entire first half.

The Spartans’ lead was cut to 10 with 6:11 remaining, then to 6 at the 2:30 mark and finally to only 2, 57-55, with 2.7 seconds on the clock. However, Berthoud junior Tucker Skoric was able to sink one of his two free throws to put the game ever-so-slightly out of reach for Roosevelt.

After Skoric’s foul shots, Roosevelt threw their in-bounds pass away thereby allowing Berthoud to notch a mark in the “W” column. The victory improves the Spartans to 2-3 on the 2011-12 season while the Roughriders drop to 0-5.

Berthoud Head Coach Pete Scheck admitted after the game that allowing Roosevelt to come back from 13 points down made the game too close for comfort and added, “We did the right things a lot of times … but we missed a couple of shots and a couple of free throws and if we make those we can probably keep that score stretched out and be okay.”

Berthoud was in control of the game for much of the first half, taking 30-19 lead into the locker room at halftime. The Spartans scored nearly half of their points from the stripe, making good on 14 of their attempted 17 free-throws in the opening two periods. Seniors Zach Ruebesam and Greg Hutchins did most of the damage from the floor as each drained a pair of three-pointers.

Ruebesam and Hutchins each sank another trey in the third period as the pair combined for 12 of Berthoud’s 15 points. Yet Roosevelt made good on six free throws, more than they made the entire first 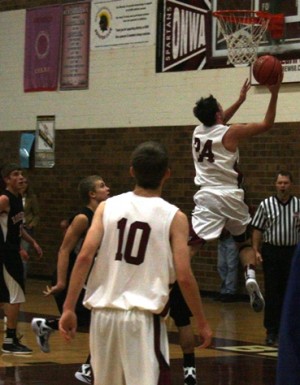 [2]
Greg Hutchins goes in for a lay up

half, added a three-pointer of their own and nearly matched Berthoud’s output in the period by scoring 13 points.

With their 45-32 lead entering the final period, Berthoud opted to switch to a smaller, quicker lineup. “With that big lead we wanted to get a guard-heavy lineup in there so we could move the ball and

spread them out a little bit and maybe get to the rim that way,” is how Scheck described his thinking in the fourth period.

The strategy did not work as Scheck had planned however as Roosevelt made use of their size advantage. 6’3” senior Dylan Cunningham and 6’4” sophomore Colby Best Walter combined to score 17 points for the Roughriders in the final period.

Yet Berthoud’s smaller lineup was able to excel at drawing fouls; Berthoud took a whopping 16 free throw shots in the final period and controlled the clock with superior ball movement.

Both teams will play their final game of the Berthoud Tournament on Saturday afternoon; the Spartans will take on the Northridge Grizzlies at 2:30pm and the Roughriders will face Thompson Valley at 11:30am.

From the Loveland Reporter-Herald

By Sean Star Sports Writer
BERTHOUD — Just two weeks into his first season as coach of the Mountain View High School girls basketball team, Eric Jefcoat hasn’t exactly had a ton of practice time to go over the countless of number of end-of-game scenarios his team will face throughout the course of a season.

So with his Mountain Lions down a point with 4.7 seconds left in regulation Friday night at Berthoud High School, Jeffcoat went to the old dry-erase board. Though the play, which had to go the length of the court, didn’t work to perfection, it eventually got the job done. Read More [3]