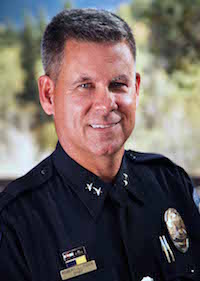 Ticer, who has 26 years of experience in all levels of police work, emerged from a field of six finalists for the job who visited Loveland March 31-April 1. He accepted the offer from City Manager Bill Cahill at the conclusion of a final round of testing and background investigation.

Ticer for the past six years has been the Chief of Police in Avon, a mountain community just west of Vail on Interstate 70, where he is credited for advances such as the use of body-worn cameras and for community engagement work that brought police and residents closer together.

The son of an Arizona Highway Patrol officer, Ticer’s Arizona career began in 1989 at the Prescott, Ariz., Police Department after a four-year tour of duty with the U.S. Air Force security police. In 1990, he followed his father’s path in joining the Arizona Highway Patrol, the beginning of a 20-year career with the Arizona Department of Public Safety.

In the Highway Patrol, he rose quickly through the ranks, becoming a department commander, with the rank of major, in 2008. He came to Colorado in 2010 to lead Avon’s 22-member police force.

Among Ticer’s career highlights are:

Ticer is a nationally recognized speaker, writer and teacher on law enforcement topics, including as an authority on the impact of legalization of medical and recreational marijuana. He also is a highly regarded traffic safety specialist, having written numerous articles for high-level publications on alcohol-impaired driving and enforcement challenges regarding older drivers.

In 2014, he was publicly honored at Coors Field by the Colorado Rockies for his lifetime achievement in traffic safety.

His tenure in Avon included leading the department through its first accreditation process through CALEA, the national Commission on Accreditation for Law Enforcement Agencies. Under his leadership, the department also won the International Association of Chiefs of Police Civil Rights Award, for improving relationships and building trust in the town’s immigrant community.

He also served as incident commander during the first USA Pro Challenge cycling race through parts of Eagle County, and as operations section chief during the 2015 World Alpine Ski Championships that drew more than 200,000 spectators to the area.

Ticer holds a Bachelor’s Degree in criminal justice and a Master’s Degree in Educational Leadership, both from the University of Northern Arizona. He also is a graduate of the FBI National Training Academy.