[1]
Santos shoots for a 3-pointer in the third

A 24-point fourth period was not enough for the Berthoud Spartan boys basketball team on Friday night in the Berthoud High gym. The Spartans fell to the Platte Valley Broncos 67-54. The loss drops the Spartans season record to 5-8 overall and 3-3 in the 3A Patriot League.

The Spartans have been living and dying on their three-point shooting all season. Friday night they died; Berthoud was only 6/23 (26%) from beyond the arc. Even standout shooters Zach Ruebesam and Greg Hutchins were able to convert only four of their combined 17 attempts from three point range. The Spartan’s shooting from two point range also left something to be desired as the team was only 11/33 on the night. From the free throw line, however, the Spartans fared much better as they made good on 14 of their 17 foul shots.

Despite their shooting struggles, the Spartans were able to keep the game close throughout most of the first half. In the first period the Spartans out-scored the Broncos 11-10. After a strong start to the second period for Berthoud, Platte Valley took control and finished the period with a 14-6 run.

The Spartans battled hard in the third period but Platte Valley was able to extend their lead to 44-30 by the end of the period. Berthoud refused to quit and played their best offensive ball of the night in the final period. The Spartans scored 24 points in the fourth period, more than they had been able to score through the entire first half. The fourth period was also the best period of the game for Platte Valley as they added another 23 points to make the final score 67-54 in favor of the Broncos. 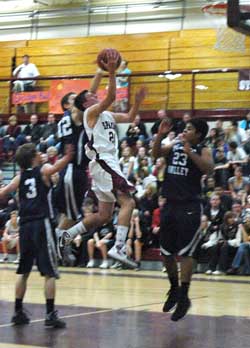 Ruebesam has been Berthoud’s leading scorer throughout most of the season and Friday night was no different. Ruebesam had a team-high 15 points, Hutchins added 11 and sophomore guard Alex Santos contributed 10. Ruebesam also lead the Spartans with five defensive rebounds and senior center Cameron Botts had four boards on each end of the floor for a team-high eight rebounds. Santos led the Spartans with three assists.

Berthoud will have a chance to get back to winning ways on Saturday night with a contest against 4A Northern conference member Niwot. The Cougars will bring a 9-7 overall record to the BHS gym.

The Berthoud High girls basketball team trounced Platte Valley 55-25 in Kersey. The victory improves the Lady Spartans to 10-3 on the season and 4-1 in the 3A Patriot League. The Lady Spartans will also take on Niwot Saturday night in Niwot at 6pm.