What Fascism Looks Like — Transcanada And Brutality In East Texas [1] 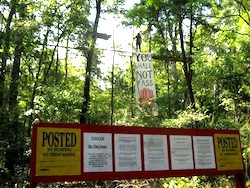 [2]The last stand at the Alamo was in west Texas.  East Texas now has a county in the midst of its own last stand against another foreign invader.  At the Alamo in 1836 it was the Mexican army over-running all in its path.  In Wood County [3] today it’s the Canadian corporation TransCanada’s Keystone XL Pipeline over-running all in its path — only this time the Texas government is on the side of the invaders.  And so is the U.S. government.

But there are also determined people getting in its path.

On September 24, eight members [4] of Tar Sands Blockade climbed 80 feet into tree houses [5] in the path of Keystone XL construction, vowing to remain there until the pipeline is permanently stopped.  Members of Tar Sands Blockade are committed to nonviolent direct action “to stop TransCanada from trampling landowner rights, endangering waters supplies and the stability of the global climate.”

Tree-sitting is just the latest in a series [6] of Blockade actions [7] against Keystone XL since construction started on August 9 in Livingston, Texas, but mainstream media attention has been largely absent.  An occasional piece in the Houston Chronicle or the Texas Observor might qualify, and possibly one in the Paramus Post in New Jersey, but otherwise most of the coverage has been local, or on environmental web pages and friendly blogs like firedoglake.com [8]

Previous Blockade events have managed to shut down pipeline construction temporarily, sometimes for a full day.  To date, 14 people arrested after they blocked or chained themselves to equipment.  During the summer, Blockade trained more than 70 people in non-violent direct action.The tree house occupation is a deliberate escalation in tactic, designed to be permanent, with a supply chain in place to support a long siege. …  Read More [1]

Further reading in Fascism in America  [9]