LOVELAND, Colo. – The  Colorado Eagles registered a season high 50 shots in their 4-3 overtime win against the Arizona Sundogs, but it was the defensive corps that was the real story for the home team. Forced to play with just five d-men for most of the game (after Joe Grimaldi received a game misconduct penalty in the first period), Colorado’s final two scores came off the sticks of defensemen.

The Eagles dominated play in the first period, out-shooting Arizona 18-7, but the Sundogs scored on two of their first three shots to take an early 2-0 lead. The opening goal came at 3:59 when Kyle Hood took a shot from the right point — Arizona’s first shot of the game — that Joey Sides deflected past Kyle Jones from the left side of the crease for a power-play tally.

Sides made it 2-0 at 6:48 after the Eagles failed to take advantage of a 5-on-3 power play. With Sides coming out of the penalty box, Tyler Butler chipped a pass off the right wing boards to send the speedy forward in on a shorthanded breakaway. Sides beat Jones with a pretty top-shelf shot after a toe-drag across the doorstep. 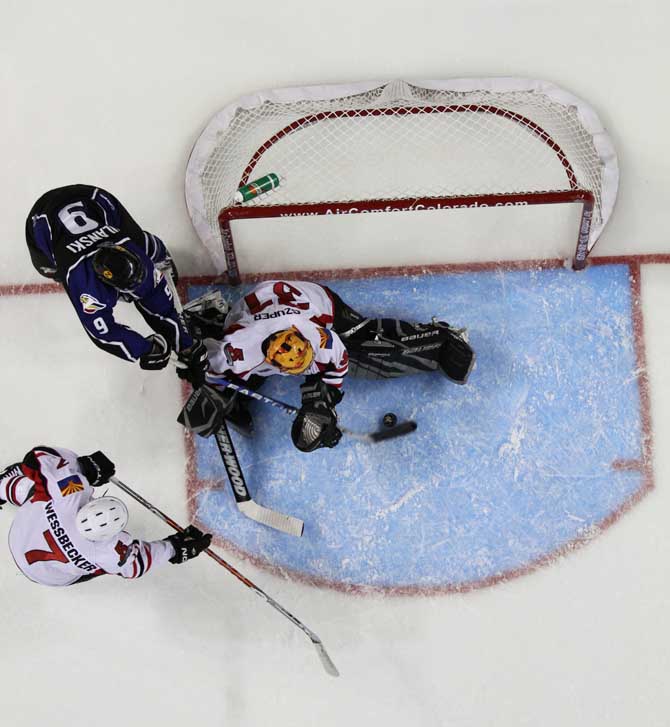 [1]
Ulanski's goal ties the game at 2-2. Photo by Samantha Baker

The Eagles cut that lead in half less than 30 seconds later when Steve Haddon scored a power-play goal from low in the right circle. And at 10:34, Kevin Ulanski tied the game at 2 with another pretty play. On the score, Scott May circled off the left wing wall and into the high slot before firing a shot on Levente Szuper. The puck fluttered off the goaltender’s glove and Ulanski, who was stationed at the left side of the crease, was able to knock it out of mid-air with a backhand swipe. 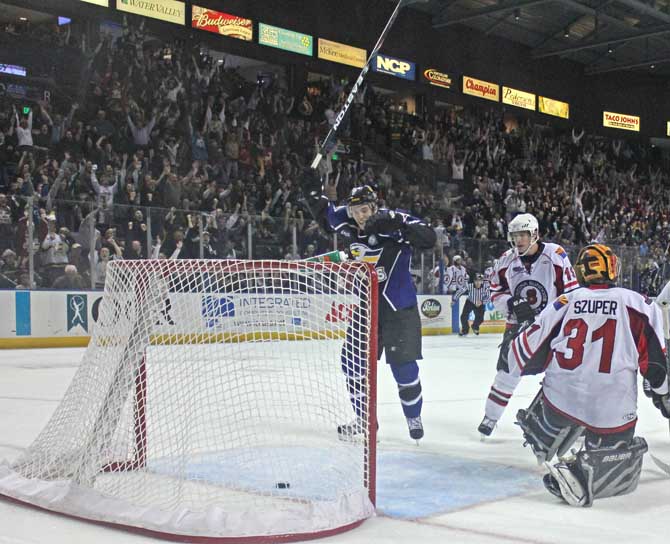 [2]
Szuper gets caught out of position. Photo by AJ Nazaro

Colorado out-shot Arizona 15-8 in the second period, and got the frame’s only goal with 13.8 seconds left. On the play, Andrej Hebar found Aaron Schneekloth pinching toward the slot and the defenseman put a backhand shot from the right circle past Szuper. That point made Schneekloth the franchise’s all-time leading scorer, moving him out of a tie with Brad Williamson and alone into six place on the all-time list. The assist was Hebar’s first point as an Eagle.

The Eagles again carried the play in the third period, but couldn’t get a puck past Szuper. The ‘Dogs netminder’s best save came with 6:30 left in the game when he stopped a one-timer from Riley Nelson on a Colorado 3-on-1 rush. And at 16:17, his teammates rewarded his strong play when Hood put home a John Wessbecker rebound to send the game into overtime. 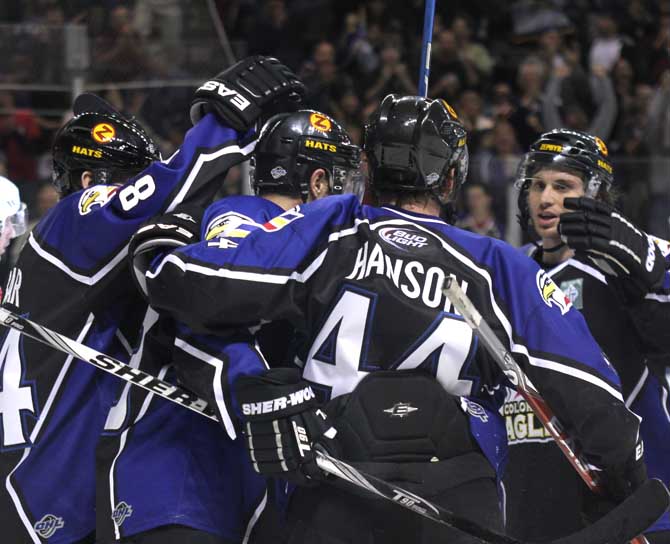 Colorado withstood an Arizona power play in overtime, and was able to get the winner with 21.9 seconds left in the extra session. Former Sundog Matt Hanson scored on a rocket from atop the left circle, putting the puck top-shelf for his second goal of the season. Ironically, both of his goals this season have come against his former team.

The Eagles will take on the Mississippi RiverKings at the Budweiser Events Center Saturday night.