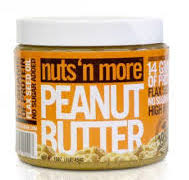 When it comes to peanut butter everyone thinks of the sticky, yummy spread that is loved by all…including our pets, especially our dogs. But there is a new player in town and it is highly toxic to our pets. Of course, it is not the peanut butter that is toxic, and No, dogs have not developed life threatening peanut allergies. These peanut butters are NOT your mainstream brands sold in grocery stores. These peanut butters are sold online and in nutritional and health food stores and contain double the protein. But they also contain an artificial sweetener known as Xylitol which is a known, life threatening toxin for animals.

Xylitol is a sugar alcohol found in small amounts in berries and other foods, and is extracted from fibrous plants such as cornhusks and some woods for commercial use. Xylitol, which is considered harmless to humans, can cause an animal’s blood sugar to drop dangerously low, can lead to liver disease, and life threatening clotting problems. The ASPCA’s poison control center examined eight cases in which dogs had been fed the peanut butter with xylitol. Five of the dogs either died or had to be euthanized.

It does not take much xylitol to poison a dog, especially a small dog. Symptoms typically begin within 30 minutes and can last for more than 12 hours, but symptoms may not begin until 12 hours after the xylitol was eaten. Symptoms begin with vomiting and then progress to incoordination, collapse, and seizures.

The hypoglycemic dose of xylitol for dogs is considered to be approximately 0.1 grams per kilogram of body weight (about 0.45 gram per pound). A typical stick of gum contains 0.3 to 0.4 grams of xylitol which means that a 10-lb dog could be poisoned by as little as a stick and a half of gum. The dose to cause liver disease is 1 gram per kilogram of body weight, about ten times more than the above dose. In the example above, the 10-lb dog would have to find an unopened package of gum and eat it for liver destruction to occur.

In humans, xylitol is absorbed slowly and has little to no effect on blood sugar or insulin levels. However, in dogs, xylitol is quickly absorbed into the bloodstream within 30 minutes. It then acts as a strong, dose-dependent promoter of insulin release. This causes profound hypoglycemia (low blood sugar). If the hypoglycemia is severe enough, death will ensue.

Similar effects on insulin release are seen in cows, goats, and rabbits. Xylitol’s effect on insulin and blood glucose in cats is not clear at this time.

These peanut butters are marketed to body builders and health conscious consumers and go by the names Nut ‘n more, P28 and Nutty by Nature. Xylitol is also commonly found in sugar free gum and mints, oral care products, and baked goods.

If you think your pet may have ingested any of these products, please seek veterinary care immediately or call the ASPCA Animal poison control at (888) 426-4435