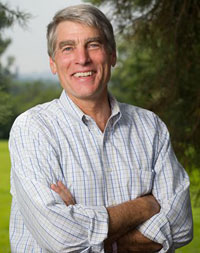 [2]This month, the United States hit an unfortunate milestone. Our national debt officially passed $15 trillion – an enormous number that represents a serious threat not just to our economy, but also to our national security.

This week, the bipartisan congressional “super committee” was unable to reach a deal to cut at least $1.2 trillion from our national debt before its deadline. Its failure could trigger automatic cuts to federal programs – including defense – if Congress is unable to agree on a balanced package of deficit-reduction measures before January 2013.

While disappointing, the super committee’s failure is not insurmountable. And as my family gathers to celebrate Thanksgiving, I am heartened by the reminder that America is not nearly as divided as Washington, D.C., would lead you to believe. If Congress can emulate a fraction of the goodwill demonstrated across Colorado and the country this Thanksgiving, we will be closer to solving many of our nation’s challenges.

The truth is we have the right pieces in place for a successful debt-reduction plan, one that will not stifle much-needed job creation. The bipartisan Bowles-Simpson plan (named after the commission recently led by a Democrat and Republican) is a balanced deficit-reduction proposal that will make tough spending cuts, raise some new revenues, and shore up Medicare and Social Security. Everyone will have to make some concessions, and there are leaders in Congress who are capable of making these tough decisions to guide our nation through difficult economic times.

Beyond putting our nation on the path to economic stability, we must also address the root causes of our fiscal woes. For instance, the congressional “buy now, pay later” philosophy that helped lead us into this mess must be remedied. That’s why I’ve proposed a balanced budget amendment to the U.S. Constitution, which will prevent special-interest tax breaks and protect Social Security, while requiring Congress to demonstrate more fiscal restraint. I believe my version of a balanced budget amendment reflects the sensible approach that Coloradans and Americans prefer.

One thing is clear: the status quo is unacceptable to Coloradans. We will need actual cooperation – not just empty words and finger pointing – if we are to make any progress.

So, this year, before my colleagues sit down to enjoy Thanksgiving dinner, I urge them to begin focusing on how important it is that we work together to solve our shared economic challenge. I hope they will return to Congress with a renewed commitment to finding an agreement for the good of all Americans. I pledge to do the same, starting with a call for the Senate to pass both the Bowles-Simpson deficit-reduction plan, and a smart and effective balanced budget amendment.