LOVELAND, Colo. – The  Colorado Eagles defeated the Laredo Bucks, 5-0, in the Eagles’ regular season home finale, which also happened to be the 300th consecutive sellout (including playoffs) in franchise history — continuing Colorado’s minor pro hockey record.  Kevin Ulanski had five points on the night (2-3-5) while Kyle Jones recorded his third shutout of the season, pushing Colorado into sole possession of first place in the Turner Conference. 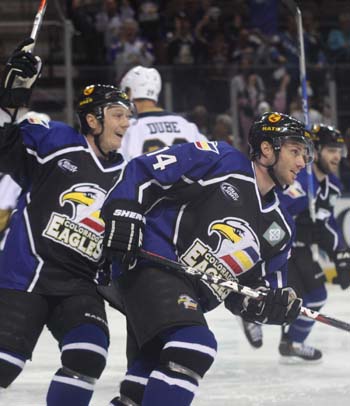 [1]
Daymen Rycroft in the right place. Photo by Corinne Ferdinand

Eagles got on the board quickly when Jason Beatty struck with a slap-shot from the left point off a faceoff win in the right circle.  The Bucks had plenty of puck possession in the period, but struggled to get shots on net (getting their first at the six minute mark). Despite having the only three power plays of the opening frame, Laredo managed just two shots with the man advantage.

Colorado out-shot Laredo 13-7 in the second stanza and struck for three goals to take a 4-0 lead into the final frame. At 7:24, Ulanski set up Joe Grimaldi for a shot from atop the right circle, and Daymen Rycroft ended up being in the right place at the right time as the rebound was kicked right out to him in the low slot.

The Eagles made it 3-0 at 15:15 when Riley Nelson sent a pass across the top of the circles to Ulanski, who then found Grimaldi crashing the slot.  Grimaldi skated in on Pier Pelletier and picked his spot top-shelf.

And just 31 seconds later — after Nelson started the play out of his own end with a nifty move — Kyle Peto hit Ulanski cutting to the crease.  Ulanski was able to put home his own rebound, making it 4-0 heading into the second intermission.

At 15:24 of the third, Ulanski picked up his fifth point of the night — becoming the second Eagle in as many nights to record a 5-point night — with his second goal of the game. Nelson pulled up at the top of the right circle and found the CHL’s reigning MVP skating through the left circle. Ulanski then beat the Bucks’ goalie from in close to make it 5-0. Ulanski had recorded a total of five points (all assists) in his four previous meetings against Laredo all-time.

Jones stopped all seven of Laredo’s shots in the third, giving him 25 saves on the night. It was his third shutout of the season and the 33rd regular season shutout in franchise history. The win was his 26th on the year, tying him with Danny Battochio for the league lead

Colorado will wrap up the 2010-11 regular season with four road games; two in Arizona this weekend and another pair against Fort Wayne on March 25 & 26.  The 2011 Ray Miron Presidents’ Cup playoffs will begin during the final week of March; tickets to Eagles home games go on sale Friday, March 18 at 10 a.m.