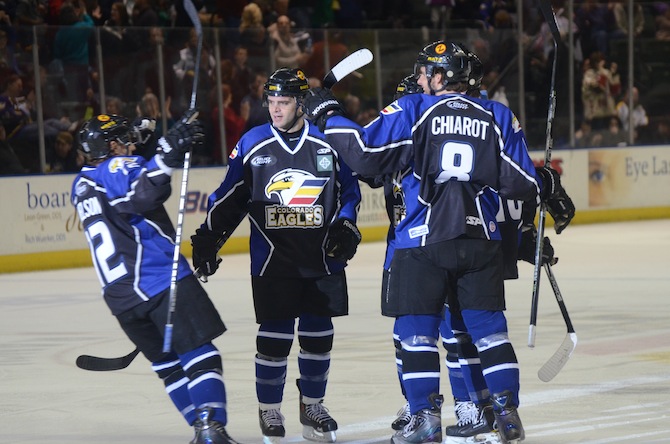 Ulanski Leads Comeback Victory; Eagles One Point Away From Playoffs

LOVELAND, Colo. – The Colorado Eagles defeated the Bakersfield Condors, 5-4, moving within a single point of a playoff berth.  After surrendering four straight goals to the Condors, Kevin Ulanski scored the game-tying and game-winning goals in the final five minutes of the final frame to fuel the Eagles’ comeback.

Colorado jumped out to an early lead when Riley Nelson scored just 45 seconds into the contest.  On the play, the Condors turned the puck over inside their own blue line and Luka Vidmar sent it to Ulanski in the slot and Nelson put home his rebound.  Gord Burnett put the Eagles up 2-0 at 9:08 of the opening frame when his shot from the right point deflected off a Condors’ stick and past Matt Keetley.

Bakersfield tied the game with a pair of goals in the second half of the first frame.  Robby Dee cut Colorado’s lead in half at 10:44 by depositing the puck past Kyle Jones from the left post.  And at 18:01, Kyle Calder banged home a loose puck following a scramble in the Eagles’ crease.

The Condors controlled the first portion of the second stanza, including an entire power play early on that was able to keep Colorado’s penalty-killing unit in their own zone for the length of the man-advantage.  Even though Bakersfield didn’t score on the power play, they rode the momentum to a 3-2 lead at 4:34 when Erik Burgdoerfer beat Jones with a slap-shot from the right circle.

And just over a minute later, that lead doubled when Dee picked up his second score of the night with a shot from the right dot past Jones’ blocker.  But the Eagles found their equilibrium late in the second frame and were able to trim Bakersfield’s lead to 4-3 with 1:58 left when Aaron Slattengren put home a rebound from the left side of the crease.

Colorado built off that momentum in the third period, capitalizing at 15:55 during a series of power plays for each team.  The Eagles took advantage of a 5-on-3 chance when Ulanski beat Keetley from low in the right circle.  And two minutes later he got a good bounce that turned into the game-winner when he took the puck from behind the net and attempted to pass it through the crease where it hit off a defenseman and snuck over the goal line.

The two teams will meet again Saturday night at the Budweiser Events Center.