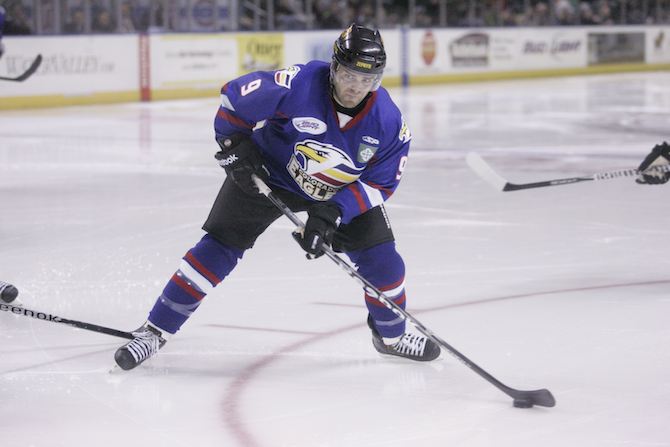 LOVELAND, Colo. – The Colorado Eagles defeated the Idaho Steelheads, 6-3, taking two out of three games in their Thanksgiving Week mini-series. Aaron Schneekloth scored two first period goals and Kevin Ulanski netted the game-winner after signing with the team earlier in the day.

Colorado scored three goals in the first 6:46 on their way to a dominating first period. Schneekloth got the scoring started at 2:55 with a blast from the point on the power play. Just over a minute later, Tommy Maxwell carried the puck down the left wing and shoveled it toward the crease as he circled behind the net. Defenseman Gord Burnett was stationed on the doorstep and was able to pick up his first point as an Eagle by putting the puck past Jimmy Spratt to make it 2-0.

The Steelheads made a quick goaltending change following that goal, replacing Spratt — who stopped two of four shots in just over four minutes of play — with Jerry Kuhn. Schneekloth then made it 3-0 by putting home a Ulanski rebound from the slot.

The Eagles made it 4-0 at 7:26 of the second period when Ulanski stormed down the right wing, made a power move toward the net and put the puck in before crashing into the cage and knocking it off its moorings. The goal was discussed between referee Geoff Miller and the goal judge to make sure the puck crossed the goal line prior to the net coming free.

Colorado pushed its lead to 5-0 at 9:06 after a faceoff win in the right circle of their offensive zone. Patrick Cey took the puck above the circle and sent a seeing-eye shot past Kuhn. Idaho was finally able to get on the board with 1:03 left in the second stanza when Jacob Cepis knocked a loose puck under Andrew Penner from the doorstep.

The Eagles killed back-to-back Idaho power plays to start the third period and then converted on their own prime man-advantage chance eight minutes in. Working on an extended 5-on-3 chance, Chad Costello put home a Schneekloth rebound from the left side of the crease to make it 6-1.

The Steelheads kept coming, however, as Chad Klassen & Michael Neal combined for a couple goals before the period ended. Klassen set up Neal with a spinning pass from the left wing into the slot at 11:21. Then at 14:40, Neal chipped a pass to Klassen as the two worked a rush down the slot to make it 3-6. That was as close as Idaho would get, however.