LOVELAND, Colo. – The Colorado Eagles defeated the Wichita Thunder, 7-5, at the Budweiser Events Center in the first game of a home-and-home set this weekend. Kevin Ulanski recorded a hat trick and Colorado’s power play went 5-for-6 on the night to outlast the Thunder. It was the second game in a row that the Eagles dressed just 14 skaters.

The Eagles took a 3-0 lead in an opening period that saw extended power-play time for each squad. Ulanski got the scoring started at 3:56 on a play created by Jason Beatty’s hard work. On the score, the defenseman powered his way to the net on a rush before circling back to his position at the left point. The puck came back to him, and he threw it toward the net where Ulanski deflected it through Marty Magers’ 5-hole.

Less than two minutes later, the Thunder were awarded 4:20 seconds of consecutive power-play time, including 1:40 of 5-on-3 play. But the Eagles’ penalty-killers were up to the task, allowing their own power play unit to take advantage soon after.

It took Colorado just 11 seconds to convert on their first power play chance of the game when Aaron Schneekloth blasted the puck toward the net and Ulanski picked up his second goal of the game by collecting the loose biscuit low in the right circle and snapping it past Magers’ blocker at 13:03.

Soon after that, the Eagles were awarded 1:52 of their own 5-on-3 play and Adam Hogg made it 3-0 for the home team at 15:08 by putting home a loose puck from the left side of the crease. That sequence of swarming the net helped Colorado to a 14-12 advantage in shots after the first period.

After the Thunder gained a brief bit of momentum midway through the middle period, scoring a pair of goals, and trimming Colorado’s lead to 3-2, the Eagles pushed back with a pair of their own.

Matt Robinson set up A.J. Gale at 7:30, for Wichita’s first goal, by skating out from behind the net and backhanding a back-door pass to Gale for a tap-in tally. At 9:55, Robinson got a goal of his own, converting on a quick 2-on-2 transition rush by snapping a shot top shelf from the left circle.

Colorado got their pair of goals after Kory Scoran was penalized with a 5-minute boarding major at 13:49 of the second stanza. Kyle Peto picked up his first goal of the year at 15:44 with a blast from the point that found its way to the twine. And just over two minutes later — with 54 seconds left on the major penalty — Matt Glasser recorded his first professional score after getting a pass in the slot from Schneekloth along the left wing.

The Thunder continued to stick around, making most of their noise in the final frame. Scoran got some redemption 1:34 into the third when his shot from the left point found its way past Kyle Jones, trimming Colorado’s lead to 5-3. But at 6:43, Ulanski notched his third goal six seconds into the Eagles’ sixth power play of the night — giving him his second hat trick in a Colorado jersey.

Wichita wouldn’t quit, however, and scored a pair of their own power-play goals, cutting Colorado’s lead to 6-5. Aaron Davis got the first one at 10:25 when Steve Kaunisto sent the puck toward the net from the point and he deflected it from below the left circle. And at 15:21, Jesse Bennefield stickhandled through the right circle and flipped a backhand pass to Mike Looby in the slot on a nice set-up.

But with 53 seconds left, and Magers pulled for an extra attacker, Hogg picked up his second goal of the night after winning a battle at center ice along the left wing boards and flipping the puck into the cage.

The two teams will travel overnight to Wichita for the second game of the weekend set Saturday night. 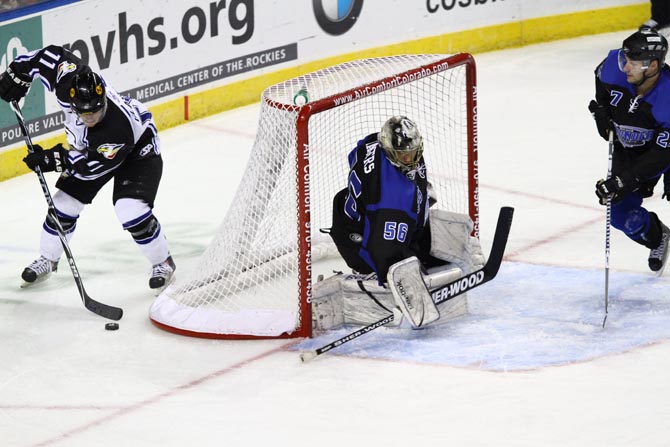