It stretched from the Caspian to the Baltic Sea, from the middle of Europe to the Kurile Islands in the Pacific, from Siberia to Central Asia.  Its nuclear arsenal held 45,000 warheads [4], and its military had five million [5] troops under arms.  There had been nothing like it in Eurasia since the Mongols conquered China, took parts of Central Asia and the Iranian plateau, and rode into the Middle East, looting Baghdad.  Yet when the Soviet Union collapsed in December 1991, by far the poorer, weaker imperial power disappeared.

And then there was one.  There had never been such a moment: a single nation astride the globe without a competitor in sight.  There wasn’t even a name for such a state (or state of mind).  “Superpower” had already been used when there were two of them.  “Hyperpower” was tried briefly but didn’t stick.  “Sole superpower” stood in for a while but didn’t satisfy.  “Great Power,” once the zenith of appellations, was by then a lesser phrase, left over from the centuries when various European nations and Japan were expanding their empires.  Some started speaking about a “unipolar” world in which all roads led… well, to Washington.

To this day, we’ve never quite taken in that moment when Soviet imperial rot unexpectedly — above all [6], to Washington — became imperial crash-and-burn.  Left standing, the Cold War’s victor seemed, then, like an empire of everything under the sun.  It was as if humanity had always been traveling toward this spot.  It seemed like the end of the line.

After the rise and fall of the Assyrians and the Romans, the Persians, the Chinese, the Mongols, the Spanish, the Portuguese, the Dutch, the French, the English, the Germans, and the Japanese, some process seemed over.  The United States was dominant in a previously unimaginable way — except in Hollywood films where villains cackled about their evil plans to dominate the world.

As a start, the U.S. was an empire of global capital.  With the fall of Soviet-style communism (and the transformation of a communist regime in China into a crew of authoritarian “capitalist roaders”), there was no other model for how to do anything, economically speaking.  There was Washington’s way — and that of the International Monetary Fund and the World Bank (both controlled by Washington) — or there was the highway, and the Soviet Union had already made it all too clear where that led: to obsolescence and ruin. 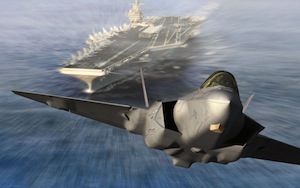 [7]In addition, the U.S. had unprecedented military power.  By the time the Soviet Union began to totter, America’s leaders had for nearly a decade been consciously using “the arms race” to spend its opponent into an early grave.  And here was the curious thing after centuries of arms races: when there was no one left to race, the U.S. continued an arms race of one.

In the years that followed, it would outpace [8] all other countries or combinations of countries in military spending by staggering amounts.  It housed the world’s most powerful weapons makers [9], was technologically light years ahead of any other state, and was continuing to develop future weaponry [10] for 2020, 2040, 2060, even as it established a near monopoly [11] on the global arms trade (and so, control over who would be well-armed and who wouldn’t).

It had an empire of bases [12] abroad, more than 1,000 [13] of them spanning the globe, also an unprecedented phenomenon.  And it was culturally dominant, again in a way that made comparisons with other moments ludicrous.  Like American weapons makers producing things that went boom in the night for an international audience, Hollywood’s action and fantasy films took the world by storm.  From those movies to the golden arches, the swoosh, and the personal computer, there was no other culture that could come close to claiming such a global cachet.

The key non-U.S. economic powerhouses of the moment — Europe and Japan — maintained militaries dependent on Washington, had U.S. bases littering their territories, and continued to nestle under Washington’s “nuclear umbrella.”  No wonder that, in the U.S., the post-Soviet moment was soon proclaimed “the end of history [14],” and the victory of “liberal democracy” or “freedom” was celebrated as if there really were no tomorrow, except more of what today had to offer.

No wonder that, in the new century, neocons and supporting pundits [15] would begin to claim that the British and Roman empires had been second-raters by comparison.