Despite a valiant effort on Valentine’s Day, it was the home time who found their game just a few candies short of a full box. In their regular season home finale against the University Bulldogs, the Berthoud High Lady Spartans ended up on the short end of the 38-33 final score. 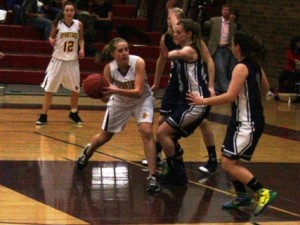 More specifically, it was in the second period where the Lady Spartans found their basketball bouquet lacking. Berthoud was out-scored 11-2 in the second period thanks to an 8-0 Bulldogs run that held the home team without a bucket for over five minutes. A lay-up from Berthoud junior center Lindsey Loberg at the 2:26 mark was the Lady Spartan’s first, and only, score of the period.

Despite out-scoring University in three of the game’s four periods, the dominant second period effort turned in by University was enough to win the game.

Berthoud bounced back strongly coming out of the locker room after halftime.  Thanks in large part to their lone senior, the Lady Spartans scored ten in the frame to cut the Bulldogs’ lead to only six, 22-28. Forward Dillon Fagler sank four shots on four attempts, all from the left side of the basket. The eight Fagler added to Berthoud’s tally in the third period accounted for the majority of her team-high ten points. 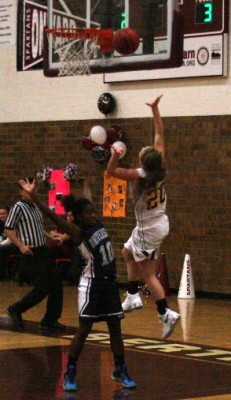 [2]
Berthoud's Kendall Baker goes in for a lay-up

The Lady Spartans continued to chip away at University’s lead well into the fourth period. At the 2:48 mark Berthoud junior guard Hannah Haggas scored to cut the Bulldog’s lead to only two, 31-29. Yet the Bulldogs were able to chew a lot of valuable time off the clock and keep their opponents from getting any closer.

University went on to build up their lead from two to four, then to seven and eventually to eight, putting the game out of reach for Berthoud. A late three-pointer from Haggas made the University’s winning

Describing the final minutes, Coach Earl said, “We missed a rebound or two and they had a couple of put-backs. We were so conscious of staying down low that we got caught not getting out on some shooters; so I think it was a combination of those two things.”

Despite the loss, Berthoud will not come away from Valentine’s Day empty-handed. The Lady Spartans will host an opening round district playoff game on Friday evening. Berthoud will face off with Strasburg (2-17, 1-10) at 6:00pm in the BHS gym.

The Berthoud High boys basketball team also fell in their game against University. Playing in Greeley, the Spartans lost by a 52-46 final score. The loss means Berthoud will finish the regular season with a sub-.500 record, 9-10 overall and 5-6 in league play.

However, like their female counterparts, the Berthoud boys team will also host a district playoff game. The Spartans will play Estes Park (6-10, 2-9) on Friday night with tip-off tentatively scheduled for 7:30, after the conclusion of the girls’ game.