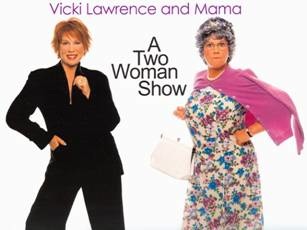 Vicki Lawrence and Mama: A Two Woman Show, features Lawrence, the Emmy Award-winning comedian, as herself and as Mama.

First there’s Lawrence, whose singing career includes her 1973 hit single, “The Night the Lights Went Out in Georgia,” and whose acting career includes numerous stage and television credits, including 11 years on the popular TV variety series “The Carol Burnett Show” and host of the TV game show, “Win, Lose or Draw.”

When Mama comes out on stage during the show, Lawrence says she likes to talk about current events, and can be expected to give her most outrageous opinions on a variety of timely subjects.

“I need to push the envelope with her,” she says. “Whether it’s Lindsay Lohan, Tiger Woods or bed bugs, I want her to address anything in the news. And Mama sings, too.”

When she’s not making people laugh as Mama, she is a spokeswoman for the Humane Society, the American Heart Association and other charities benefiting cancer research. She also speaks to women’s organizations about her life and career.