The Berthoud High girls basketball team lost 53-35 to the Valley Vikings in a rare Thursday evening game in the BHS gym. The loss drops the Berthoud to 12-6 overall and 7-3 in the 3A Patriot League. Thursday evening’s game was the final regular season contest at home of the 2010/11 season for the Lady Spartans.

Valley out-scored Berthoud in three of the game’s four periods, including a 15-0 shut-out of the Spartans in the third. The Vikings benefited tremendously from the 22 free-throw attempts afforded to them by the Spartans. Valley converted 16 of those 22 while Berthoud was only able to make good on six of their ten attempts from the foul line.

“We just weren’t in very good position defensively. We got ourselves out of position a lot so then when we tried to catch up we’d end up fouling,” is the explanation Berthoud High Head Coach Randy Earl gave after the game for Berthoud’s foul troubles. Valley converted five of six free throw attempts in both the first and third periods and shot 6/10 from the line in the fourth.

The Vikings opened the game with 6-0 run before Berthoud senior Danielle Wikre sank a three pointer to put the Spartans’ first points on the board. Wikre added another three a couple possessions later and the Spartans trailed by a 10-7 score at the end of the first period. Spartan senior Julia Perry added two three-pointers of her own in the second period as the Spartans kept the game close. Berthoud did not allow Valley to reach the free throw line once, and trailed only 17-23 at halftime. 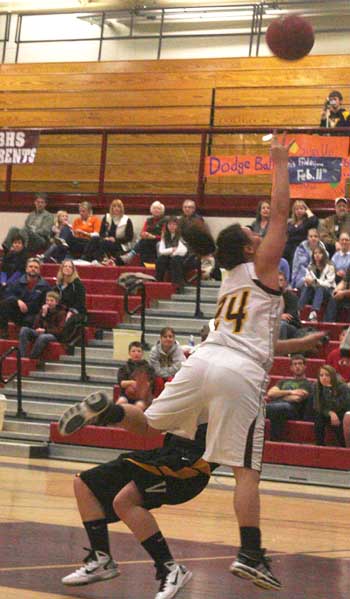 [2]
A determined Danielle Wikre charges the basket in period 4

After the closely contested first half, the wheels came off for Berthoud in the third period. Five Vikings players scored in the third period as Valley hung 15 points on the Spartans, five of which came from the foul line. “There’s been three games here in the last two weeks where we just haven’t played very good defense,” an exasperated coach Earl said after the game. When asked about the offensive struggles in third period Earl said, “We had possession after possession and couldn’t get it done; we had four or five possessions there where we didn’t even hit the rim!”

Despite the fact that the game was largely out of hand with a 38-17 Valley lead, the Spartans did not hang their heads and played their best basketball of night in the fourth period. Perry, who led the Spartans with 15 points on the night, added another pair of three pointers and converted on three of her four free throw attempts. Wikre scored five points in the final period and senior Megan McGinn tacked on an additional four as Berthoud scored 18 in the period.

The Lady Spartans will play their final regular season game of the season next Tuesday in Greeley against University High School. Berthoud will then play in the district tournament for which the precise date, time and location are yet to be announced.

Despite 14 points, four steals and five rebounds from junior Zach Ruebesam, the Berthoud High boys basketball team lost to Valley in Gilcrest by a 68-36 score.