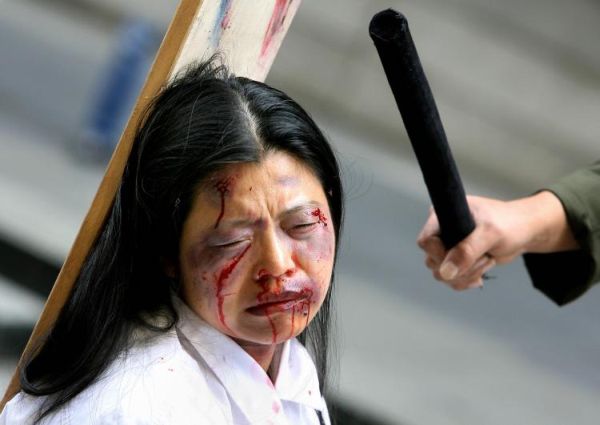 Senate Republicans are using the Defense Authorization Bill to advance some very un-American ideals. These amendments should have you worried.

In the first is an amendment that would authorize the military to operate on American soil and detain American citizens. It has long been on of the cornerstones of our democracy that the military is only to defend the country from outside sources. Under the guise of “counter-terrorism” the amendment would authorize the military to detain citizens indefinitely, a complete denial of their constitutional rights. This can  becomes a slippery slope that could soon lead to the type of military action against citizens that we saw in Libya and Syria. Additionally, it puts the military personnel in a very uncomfortable position. I, as a 30-year military veteran would refuse to obey those orders. The following article from the ACLU explains what is happening.

the Senate is gearing up for a vote on Monday or Tuesday that goes to the very heart of who we are as Americans. The Senate will be voting on a bill that will direct American military resources not at an enemy shooting at our military in a war zone, but at American citizens and other civilians far from any battlefield — even people in the United States itself.

Senators need to hear from you, on whether you think your front yard is part of a “battlefield” and if any president can send the military anywhere in the world to imprison civilians without charge or trial.

The Senate is going to vote on whether Congress will give this president—and every future president — the power to order the military to pick up and imprison without charge or trial civilians anywhere in the world. Even Rep. Ron Paul (R-Texas) raised his concerns about the NDAA detention provisions during last night’s Republican debate. The power is so broad that even U.S. citizens could be swept up by the military and the military could be used far from any battlefield, even within the United States itself.

The worldwide indefinite detention without charge or trial provision is in S. 1867, the National Defense Authorization Act bill, which will be on the Senate floor on Monday. The bill was drafted in secret by Sens. Carl Levin (D-Mich.) and John McCain (R-Ariz.) and passed in a closed-door committee meeting, without even a single hearing. Read More [3]

Another amendment to the bill would allow the United States to use torture [4] as a method of interrogation. This is a throw back to the middle ages. What is to become of our ideals as a democracy of we authorize torture. This makes us no better than Muammar Gadaffi, It must also be noted that torture is not a reliable means of extracting information. Studies by the US Military have concluded that detainees will say anything, confess to anything, just to stop the torture. We have seen our own soldiers become victims of this and make false confessions during the Korean and Viet Nam conflicts. Torture should not be allowed. See the following article for this amazing situation. Coupled with the broadening of  the military battle field to include U.S. soil, we would be authorizing torture of American citizens. We are becoming more like Gadaffi’s Libya every day.

Yesterday, the ACLU and over 30 other organizations sent a letter to the Senate asking them to oppose an effort in Congress that threatens to revive the use of torture and other inhumane interrogation techniques. If passed, an amendment introduced by Sen. Kelly Ayotte (R-N.H.) to the Defense Authorization bill would roll back torture prevention measures that Congress overwhelmingly approved in the 2005 McCain Anti-Torture Amendment, as well as a 2009 Executive Order on ensuring lawful interrogations. It would also require the administration to create a secret list of approved interrogation techniques in a classified annex to the existing interrogation field manual.

In a related development, republican presidential candidate Michele Bachmann renewed her attack on the prohibition of waterboarding and other forms of torture in her claim that the ACLU runs interrogations. But in fact, the director of the CIA, General David Petraeus and the Secretary of Defense (and former CIA Director) Leon Panetta have both said that the 2009 Executive Order applying the Army Field Manual government-wide and the 2005 McCain Anti-Torture Amendment work and are consistent with good national security.

Such a move to undermine these protections in the Senate would fly in the face of American values and U.S. legal obligations, and would obstruct U.S. military missions and endanger troops deployed abroad. Read More [5]

The last article shows the colors of the extreme right. The last Republican debate consisted of a great deal of saber rattling toward Iran. It has led me to conclude that if any of those GOP candidates make to the White House, we will soon be engaged in a war with Iran. That thought was corroborated this week as the following article points out.

This is the step that many have called “the nuclear option” and which U.S. officials recently testified could create an “oil spike” that would benefit the Iranian regime, hurt the Iranian people, and cause a recession by raising gas prices in the U.S. and around the world.

But Senator Kirk (R-IL) and his allies like Representative Brad Sherman (D-CA) believe that if we can “collapse Iran’s economy,” it will cause so much suffering among ordinary Iranians that they will overthrow the regime. This is the same disastrously failed strategy that helped kill half a million Iraqis throughout the 90’s while Saddam and his regime profited, and which ultimately only ends in war. Read More [6]

One aspect of the latter action is that congress is putting itself into forming foreign policy, usurping the authority of the President. This too is a slippery slope.

If you are as concerned as I am, write your senator and let him know.