In just the last generation, the richest 1% almost quadrupled their incomes.

Last year, half of Americans earned less than $26,000 while CEOs at top 500 companies raked in an average of $11 million.

Over the past decade, earnings for middle-class Americans actually fell. In fact, working Americans’ wages are now a lower percentage of our economy than they’ve ever been.

The divide between the richest and the poorest is worse in America than it is in nearly all of Europe and Asia and much of Africa. It’s about as bad as in Rwanda and Serbia – and it’s bad for our economy.

The 1% is not an accident – it is the result of policies our government chose to pursue. 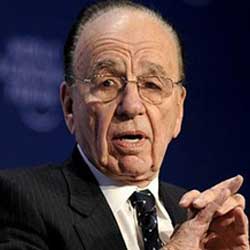 Brave New Foundation has a web site where you can express your opinion by voting which candidate is using their wealth to exploit the 99%. Vote on each on a scale of ‘ho-um” to “pure evil.” Presently Rupert Murdoch is in the lead followed by the Koch Brothers.