A Death In The Family — And The Question Is: Whodunit? [2] 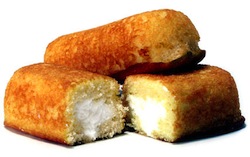 [2]Born in 1930 in Schiller Park, IL, the deceased was 82 years old at the time of passing, which ironically was the day before Thanksgiving.

Having long enjoyed the sweet life, the end was a bit bitter, for the dearly departed’s estate had been mercilessly plundered in recent years by unscrupulous money managers. This left 18,500 surviving family members in dire straits. Indeed, the family contends that the octogenarian’s death was not due to natural causes, but to foul play — a case of corporate murder.

This is the drama behind the sudden death of Twinkies. Fondly remembered as “the cream puff of the proletariat” (and less fondly as a sugar-and-fat bomb that delivered a toothache in one bite and a heart attack in the next), this industrial concoction of 37 ingredients became, for better or worse, an icon of American food processing.

The father of the Twinkie was James Dewar, a baker at the old Continental Baking Co. who saw the goo-filled tube cake as a way to keep the factory’s confection machinery busy after strawberry shortcake season ended. Yes, the Twinkie was actually conceived as “food” for idle machines. How fitting is that?

But we humans happily swallowed this extruded marvel of comestible engineering. As a teenager, I probably downed my weight in Twinkies each year — and my long years on this Earth might well be due to the heavy dose of preservatives, artificial flavors and other chemicals baked into every one of those cellophane-wrapped two-packs I consumed.

The Twinkie was the best-seller of Hostess Brands, a conglomerate purveyor of some 30 nutritionally challenged (but moneymaking) brand-name food products, ranging from Wonder Bread to Ho Hos. In the past year, Hostess racked up $2.5 billion in sales — yet it suffered a staggering $1.1 billion in losses. Thus, on Nov. 21, Ripplewood Holdings, the private equity outfit that had taken over the conglomerate in 2009, pulled the plug, solemnly announcing that Hostess simply couldn’t survive.