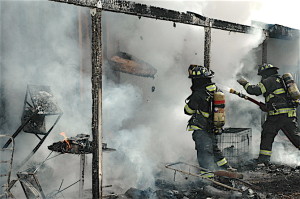 One person was killed by a fast moving fire that destroyed a mobile home in Berthoud Friday. Units from Berthoud Fire and Loveland Fire were dispatched at 11:20 a.m. to a report of a residential structure fire with one party trapped. Heavy fire was showing from the front side of the home as firefighters made entry to locate the trapped party and extinguish the fire.  Firefighters found one unresponsive resident just inside the living room area and quickly removed her to Thompson Valley EMS’s waiting ambulance crew.  The victim was transported to Medical Center of the Rockies where she was pronounced deceased. The identity of the deceased has not been released pending notification of next of kin. The fire was marked as being under control, eleven minutes after arrival of the fire departments and contained to the mobile home of origin.

Investigators from the Berthoud Fire Protection District, Larimer County Sheriff, and the Bureau of Alcohol, Tobacco, and Firearms (ATF) are investigating a fatal fire that occurred on Friday, March 25 on Second Street in Berthoud. The investigation into the cause of the fire continued through the weekend and a report is expected this week.