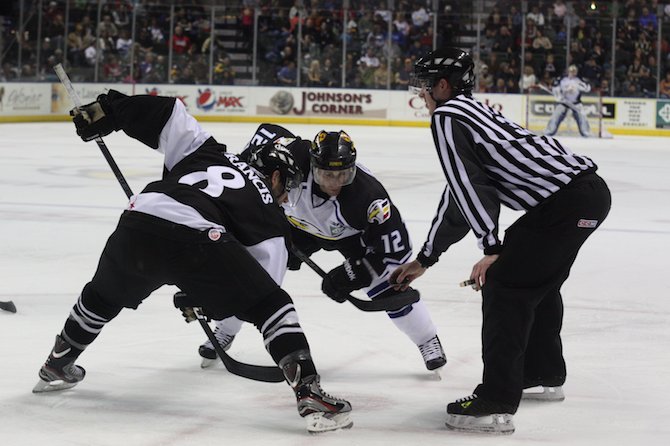 LOVELAND, Colo. – The Colorado Eagles dropped a game to the Las Vegas Wranglers, 7-4, splitting their weekend set at the Budweiser Events Center.  The Pacific Division’s top team — sitting four points ahead of the Eagles in the Conference standings — scored four goals in 144 seconds midway through the game to blow it open.

The Eagles came out strong, building an early advantage in shots, but the Wranglers quickly swung momentum with the help of several power plays.  Peter MacArthur opened the scoring at 4:50 when he put home an Eric Lampe rebound while stationed alone on the doorstep.

And 80 seconds later, Las Vegas took advantage of plenty of open ice as they worked a 4-on-3 power play and Adam Miller scored from the right circle.  Despite the two goals allowed, Kyle Jones was superb in the opening period, turning in several highlight saves.

The second period saw an explosion of scoring midway through, and unfortunately for Colorado, the visitors were the biggest benefactors.  Colorado cut Las Vegas’ lead in half at 7:25 when Adam Chorneyko sent a pass from the left midboards to Riley Nelson for a quick release from the slot.

Just 31 seconds later, the Wranglers scored the first of four unanswered goals in a span of 144 seconds.  Josh Lunden beat Jones top-shelf to make it 3-1.  Then Fallon helped his team take advantage of an Eagles line change by moving the puck up ice to send Adam Huxley all alone on a successful breakaway just over a minute later.

And just over a minute after that, Chris Francis swung behind the Eagles’ net and found MacArthur alone between the circles to make it 5-1, chasing Jones in the process.  Andrew Penner didn’t fare much better as the Wranglers scored on their first shot against him — just 21 seconds later — when Lampe & Miller worked a 2-on-0 in the low slot to make it 6-1.

Things stabilized after that, and the Eagles were able to get their second goal at 16:33 when Nelson found Kevin Ulanski in the left circle where he snapped a shot past Fallon.

The Eagles climbed closer early in the final frame when Chorneyko won a race through the neutral zone and picked up a loose puck in the high slot — fighting off a defender the entire way — before beating Fallon to make it 3-6.  But Miller and the Wranglers continued to add to their goal totals as the forward netted a hat trick at 5:58 after working a 2-on-1 rush with Lampe.

Shortly thereafter, Colorado was finally awarded its first power play of the game, and they used it to help them close the gap again.  Just two seconds after the man-advantage expired, Steve Haddon scored on a deflected shot from the point to make it 4-7.

The Eagles still had plenty of time to mount a comeback, and when they were awarded 1:08 of 5-on-3 less than two minutes later it seemed entirely possible.  However, they couldn’t convert on either chance, and the Wranglers were able to salt the win away.