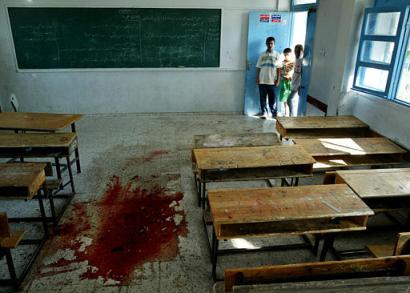 Palestinian students peer into the doorway as they look at a large pool of blood
on the floor at a United Nations school in Gaza. The shooting took place
Tuesday, June 1, 2004. Two students, ten years old, were critically wounded by
Israeli forces while attending class a shortime earlier

One little-noted but important result of the November election in the US that returned President Barack Obama to the White House for another four years is that the right-wing Israeli government and the Zionist lobbying organization AIPAC (for American Israel Public Affairs Committee) took a surprising drubbing and emerge a much weaker political influence going forward in US politics.

According to the recently created liberal Jewish lobbying organization J-Street [4] [1], which advocates a peacefully negotiated two-state solution to the decades-long Israel-Palestine issue, Jewish voters in the US did not flock to the Zionist cause this election. Despite hundreds of millions of dollars in campaign funds from AIPAC and some wealthy Jewish Americans that were contributed to back hard-line Zionist or pro-Zionist political candidates for president and Congress, and despite a vicious anti-Obama ad campaign in southern Florida and in New York City targeting Jewish voters, exit polls the organization commissioned show that 70% of Jewish voters nationwide cast their ballots for Obama — the same percentage that has historically voted Democratic. Perhaps more important, given the current bluster by the Netanyahu government in Israel about the urgency to attack Iran, exit polls showed that 90% of American Jews list domestic issues as their main concern, not Israel. As one example of the kind of fear-mongering ad campaigns Zionist funders were running in Florida and New York, there was a large billboard put up along the state’s main north/south interstate highway, which showed an Iranian missile heading towards the state of Israel, with the message: “Friends don’t let friends get nuked. Stop Obama!”

The biggest blow to the Israeli government and to AIPAC, of course, was the defeat of Republican presidential candidate Mitt Romney.

During the height of the campaign, Israeli Prime Minister Benjamin Netanyahu visited the US and openly endorsed Romney, criticizing the president for his unwillingness to back or have the US participate in an air strike on Iran’s nuclear facilities. President Obama — who has not visited Israel during his entire first term of office – READ MORE [3]